My back felt better in the morning after a good night’s rest. I took breakfast to go—sweet potato bark and mixed nuts. The sun was rising and shining to the east. I lingered at several stream crossings, sticking my hand into the current and peering into pools for signs of critters.

I walked through a field where the path narrowed and grass grew above my waist. My legs and shorts got wet brushing against the dewy grass, but it refreshed me, and that glorious sunshine would dry me out again. Down an embankment, the Elk River sparkled as it rippled over smooth stones.

I followed a side trail through rhododendron and moss to Jones Falls. The water sprayed over a ledge set back in the woods, pooled midway down, then flowed like a lacy veil over tilted slabs of rocks. 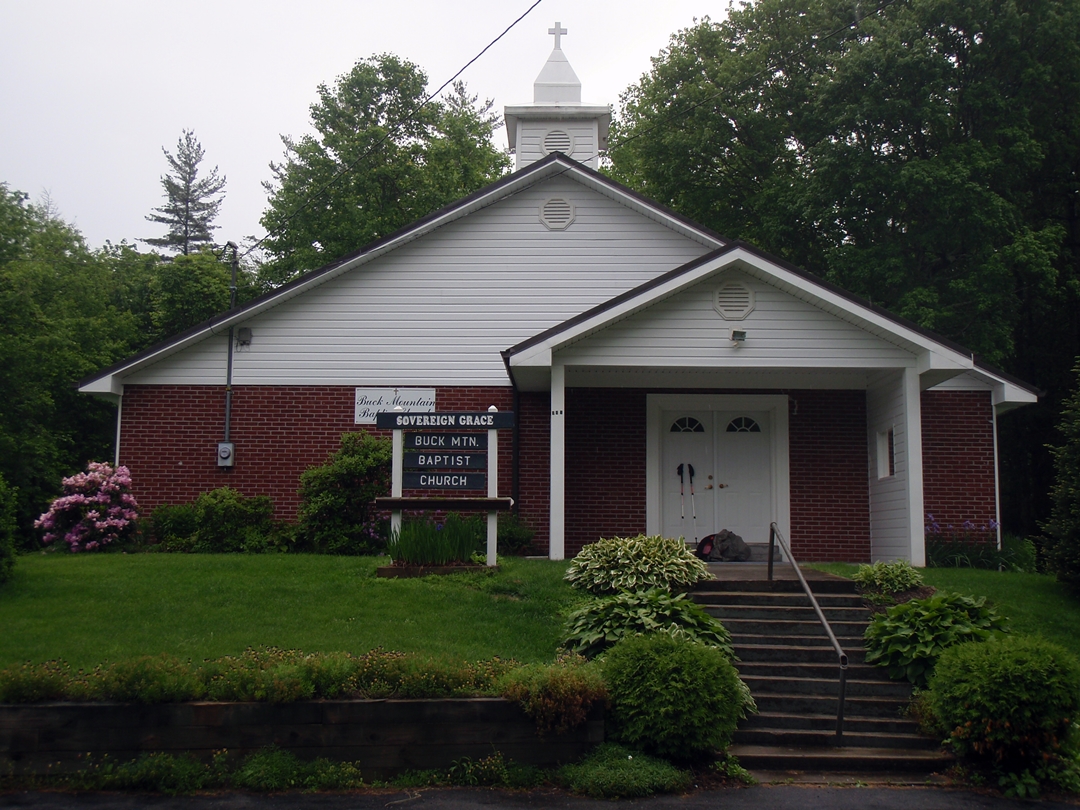 The white clouds of the serene morning turned dark by the time I came to the road crossing at Buck Mountain Baptist Church. I got water from the spigot and sat down under the awning at the church’s front door. The back pain returned and advanced down my right thigh with a tingling sensation. I sent up a prayer for relief. No answer, as far as I could tell, except for a heavy downpour of rain, which kept me there, sprawled out for a nap at the Buck Mountain pearly gates. An hour later, the rain stopped and the clouds parted, so with steam rising from the blacktop in front of the little brick church, I crossed over and back into the woods. 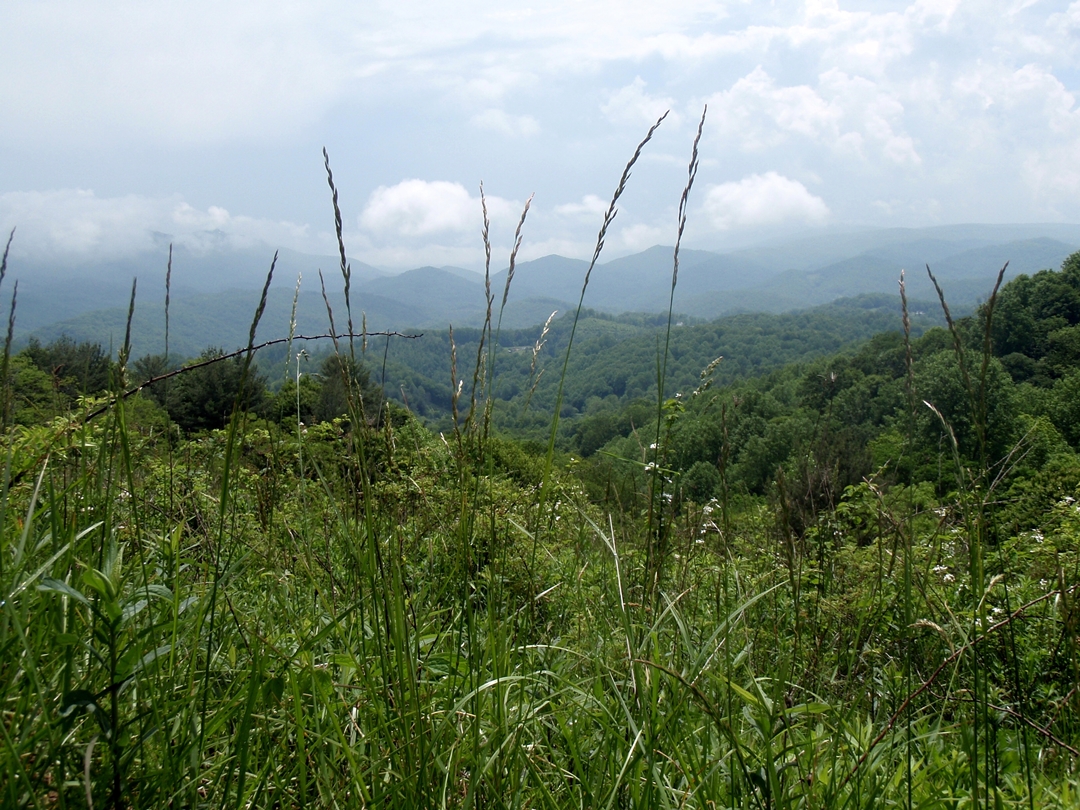 Later, I walked into a field filled with blackberry shoots covered in white flowers. From the field, a spectacular view opened up of mountains rising to billowing clouds. Although spellbinding from a distance, one of those mountains, the big one, was Hump. Hump Mountain was waiting for me.

Ominous clouds closed in behind and ahead of me as I reached the crossing at Highway 19 between Roan Mountain, Tennessee, and Elk Park, North Carolina. Mountain Harbour Hostel was just three tenths of a mile to the right, so I went there seeking refuge. I sat in a rocking chair on the wide wraparound porch up at the house and waited for the proprietors, Mary and Terry, to get home. The note on the door said they would be home soon. Terry pulled up in his truck just as I was considering a move to the hammock. He escorted me down to the horse barn, which had a loft for hikers. 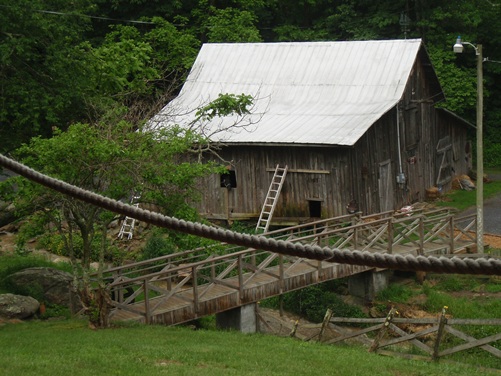 Mountain Harbour Hostel, viewed from the front porch of the house.

I took a shower, and then Terry dropped me off at the Highland Chiropractic Clinic in town. Dr. Roger Heschong adjusted the alignment of my spinal cord and massaged my lower back and hips. He gave me his cell phone number and said to call him in the morning if I was still in pain. While I waited for Terry to come back and fetch me, the receptionist offered me a cheeseburger. I said no at first, thinking she meant to go out and get me one, but then I asked, “You mean you have a cheeseburger, right here, right now?” And she did. So, I got an adjustment and a cheeseburger. Trail magic!

Terry took me to a pharmacy where I bought Icy Hot pain-relieving cream and a bottle of pain-relief pills. From there, it was off to the King of the Road Steakhouse for a twelve-ounce T-bone, baked potato, salad, apple pie, and two glasses of sweet tea. I dined with Barbara and Vicki from Florida, who were also staying at the hostel. Barbara had thru-hiked the Appalachian Trail in 2004. Back at the hostel, we took a look at each other’s homemade alcohol stoves. We each had a different type, but mine was the simplest, being just an empty aluminum tea-light-candle cup. They retired to the bunk area, accessed by a ladder, and I slept in the private room on the main level.

A day of rest at Mountain Harbour Hostel

Mary cooked a fantastic breakfast up at the house—eggs, bacon, potatoes, pancakes with strawberries and whipped cream, assorted fruits, cinnamon rolls, juice, and coffee. Walking back to the barn, I reluctantly accepted that my back was too sore to go up Hump Mountain. Would I go home after hiking only six days? Dr. Roger picked me up and took me back to his clinic for another session. It was his day off, and he didn’t even charge me for the second adjustment. Trail angel! 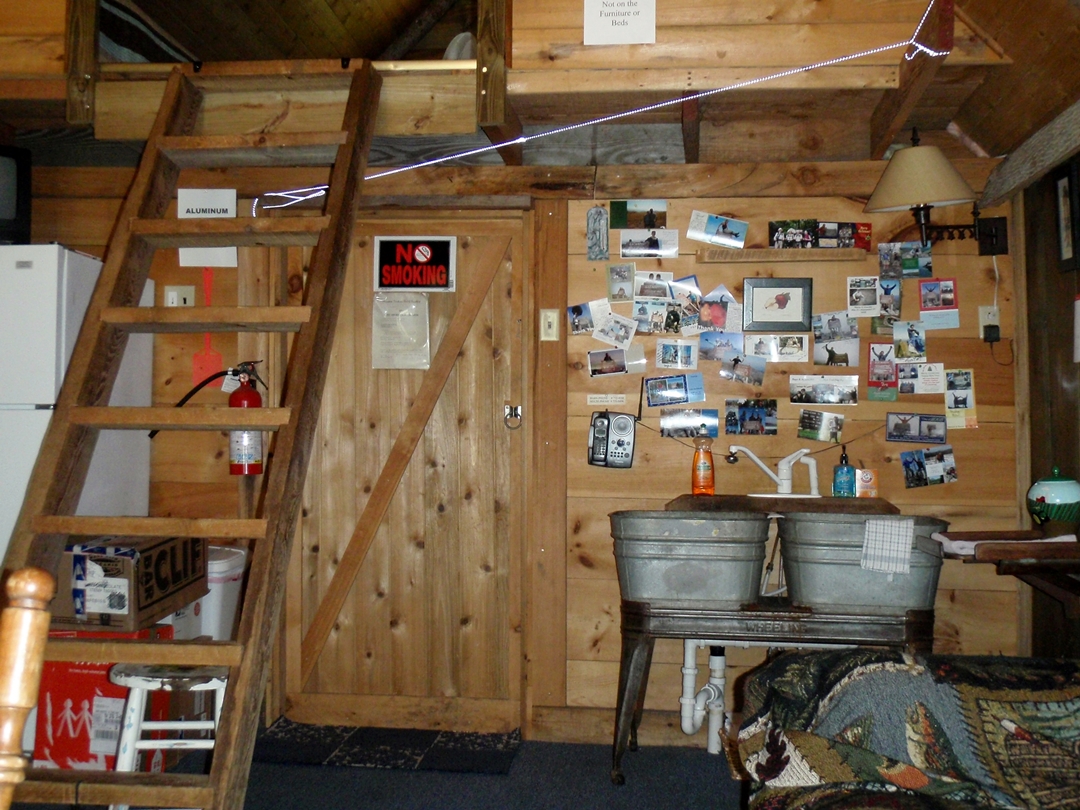 I had the hostel to myself most of the day. The walls and ceiling were lined with cedar, which covered any trace of the three horses underneath. The loft was cozy with carpeting, a couch, chairs, and a table. I took another hot shower, massaged my back and hip with Icy Hot, and made good use of the ice packs from the freezer throughout the day. During a nap, I dreamed that I was in a wrestling match. It was a dream that had recurred many times over the years. The opponent is a real person—the kid who beat me in the regional tournament my senior year of high school, dashing my expectation of competing in the state-championship tournament. The dream always ends the same—I try desperately to score a takedown to catch up, the buzzer blasts, the referee holds up the other kid’s arm, and I go to the locker room and cry.

Wrestling is a grueling sport. You practice hard and push yourself past tired. On the mat, it’s just you and the other guy. The fans in the bleachers can see if you are slacking, so you don’t. As the season progresses, you build strength, endurance, and mental toughness. Thirty-three seasons had passed since the wrestling days. I was out of shape, about to be sent to the locker room. I thought of my wrestling coach, Mr. Forte—a tough, serious, good man—and what he had written in my yearbook at the end of that year: “Glenn, I only wish that I could have given you that little extra you would have needed to get over the hump.”

It was time to fulfill that wish.