There are a few tricks when dehydrating meat for backpacking meals that greatly improve its tenderness when you rehydrate it on the trail. 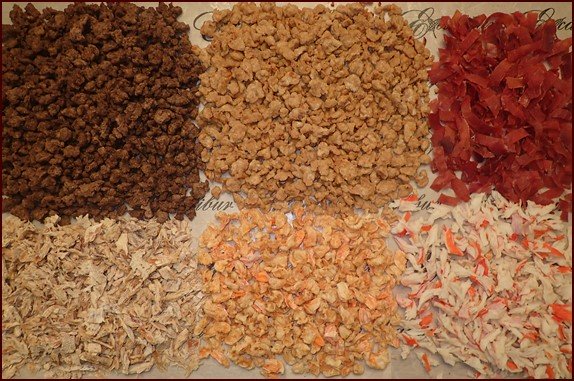 I continue with how to dehydrate chicken in the next section.

Before we get into how to dehydrate meat, let’s cover a question I often receive about dehydrating meat...

How Long will Dried Meat Keep?

Freezing dried meat will preserve it for several years.

Vacuum sealing the dried meat prior to freezing prevents freezer burn and freezing stops the clock for all biological processes.

For use and storage less than a year, freezing is not required, but is still beneficial before you assemble your meals – provided you take reasonable care in drying and packing it.

Dry only lean meats and blot off any oil during the drying process. It is the fat in meat that can turn rancid as it reacts over time with oxygen. Heat and light accelerate oxidation, so store in a cupboard away from heat.

As long as the meat you dry is low-fat, it will keep well in jars with oxygen absorbers or in jars that are vacuum sealed with the FoodSaver accessory. I have stored dehydrated meat for up to a year in jars. If you want to go longer than a year, or if you just want peace of mind, you can vacuum seal the dried meat in vacuum bags, and place the meat in the freezer. When taking dried food out of the freezer, allow the food to return to room temperature before opening the bag. Otherwise, condensation may form on the food.

Dehydrating Meat in a Food Dehydrator

Many food dehydrator user guides and books include recipes for dehydrating raw meat, such as beef jerky, by placing the meat directly into the dehydrator without precooking it.

This is not safe.

Even if the temperature setting of your food dehydrator goes up to 165°F (74°C), the temperature of the meat inside the dehydrator may not reach that temperature, due to evaporative cooling. Pathogens, such as Salmonella and E. coli, may survive the drying process.

The U.S. Department of Agriculture Food Safety & Inspection Service recommends cooking beef to an internal temperature of 160°F (72°C) and poultry to 165°F (74°C), before drying it in a home food dehydrator.

All Backpacking Chef instructions and recipes specify precooking meat before drying it. 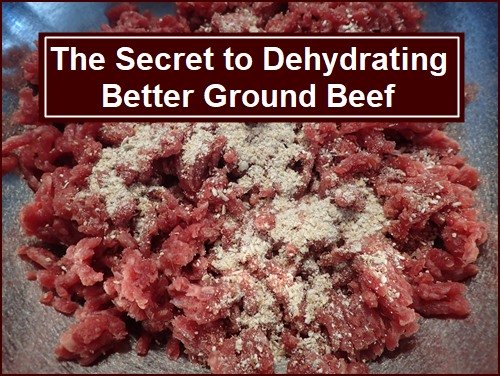 Backpackers often call dehydrated ground beef “gravel” because it doesn’t rehydrate well. Solve this problem by adding breadcrumbs to the meat before cooking it. Breadcrumbs allow more liquid to penetrate the dried meat when you rehydrate it, so it turns out tender every time.

If you are sensitve to gluten in breadcrumbs, you can substitute ground oats or millet to prep the ground beef. Learn how in this Trail Bytes article.

Some of the fat in the ground beef gets removed when you cook it. Some fat beads up on the surface of the meat while drying. Blot off the fat from the meat with paper towels after cooking it, and a couple of times while it dries. Starting with low fat meat and blotting off what you can during cooking and drying will minimize any risk of the meat spoiling after it is dried.

For each pound of beef, sprinkle ½ cup of finely ground breadcrumbs over the meat (or substitute ½ cup ground oats).

Break the meat into small pieces and cook in a frying pan over medium high heat until lightly browned and fully cooked, stirring continuously. Remove from heat and squeeze between paper towels to remove moisture.

Spread small pieces of ground beef on dehydrator trays with Excalibur Paraflexx® sheets under the mesh sheets.The nonstick sheets will catch any small pieces of dried beef that fall through the mesh. With Nesco Dehydrators, use the clean-a-screen or fruit-roll trays.

Once or twice during the drying process, move the meat around and squeeze with a paper towel to remove oil. Wipe any oil off the non-stick sheets. Break any pieces of meat that are drying slower than the rest in half.

Dehydrating meat separately allows me to include it in a wide variety of recipes which combine it with different starches (potatoes, rice and pasta) and vegetables.

You’ll find the complete collection of recipes which include dehydrated meat in my book, Recipes for Adventure.

You can also dehydrate meat in a complete meal. See Dehydrating Meat in Chili.

People write to me often to say how much they enjoy eating it on the trail.

Photo: Dried ham tastes great in Bean Bark Stew with Rice, one of the recipes in The Action Guide: Dehydrating 31 Meals.

Choose lean precooked ham with fat content less than 10%. Deli ham sliced for sandwiches, about 1/16 of an inch thick, is good for dehydrating. Sliced roast beef or turkey may be dried also, but I mostly dry ham since roast beef is more expensive.

Cut ham into ¾ to 1” wide strips and place on dehydrator trays. Dry at 145° for approximately six hours.

Blot off oil droplets that form on the surface of the meat with paper towels a couple of times while drying.

When the meat is completely dry, break the strips into smaller pieces for use in recipes.

Dehydrated ham remains a little chewy in meals, but I like the variety it adds to recipes such as Ham & Cheese Macaroni. Letting the meal boil for two minutes helps soften it up.

Dehydrating meat from the sea will add many menu options to your backpacking trips.

To save time, buy frozen, precooked and peeled, medium shrimp. Small shrimp get lost in meals. Large shrimp can be used, but the medium size divides well into pieces for dehydrating.

Thaw shrimp in refrigerator or ice cold water. Pinch off the tails and rinse.

Slice each shrimp into four or five pieces, arrange in a single layer on dehydrator tray, and dehydrate at 145° for approximately six hours until hard. There should be no moisture remaining when you cut a piece in half.

Drain off the water into your dog’s bowl. Break the tuna up into small pieces and spread out in a single layer on the dehydrator tray. Excalibur mesh sheets keep all but the tiniest crumbs from falling through, so I don't use non-stick sheets. But you certainly can use them.

Dehydrate at 145° for approximately six hours until crispy. Drying tuna will stink up your house.

Pull the meat apart into smaller pieces and dry at 145° for approximately six hours until hard.

Dehydrated home-cooked chicken can turn out tough as leather in your backpacking meals. Learn how to dehydrate chicken so that it turns out tender every time. 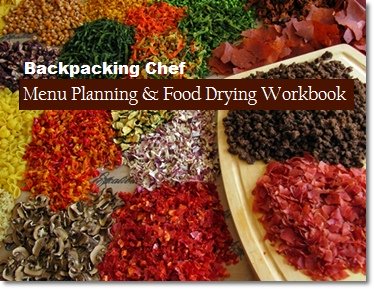