I bellied up to the house in the morning for another one of Mary’s breakfasts. Mel, a section hiker from New Jersey who had spent the night, helped me adjust my backpack. It had been riding a little low. Fog blanketed Mountain Harbour early, but blue skies and a cool breeze prevailed when I walked up the highway and back into the woods toward Hump Mountain. The day of rest and meditation improved my prospects, as did the kindness of the people who helped me when I was down in this small Appalachian town. 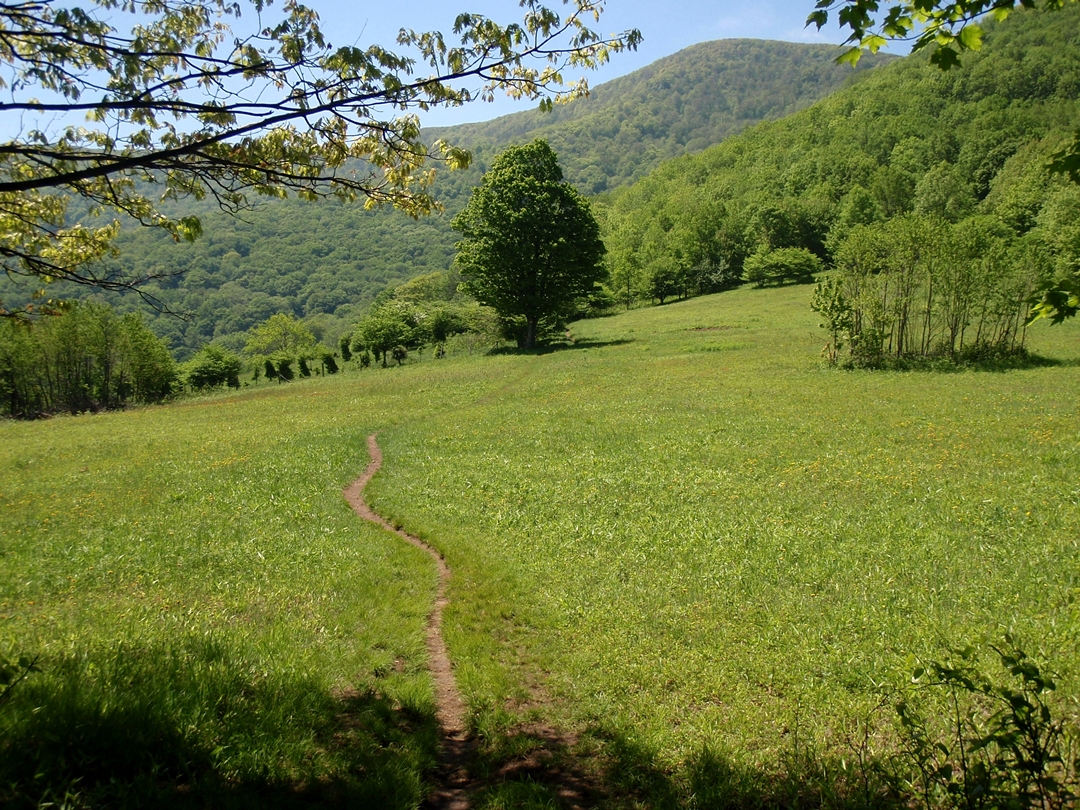 The trail up Hump Mountain gained five hundred feet in elevation every mile for five miles. I walked slowly, inhaling the mountain air inquisitively through my nostrils rather than huffing and puffing through my mouth. My focus shifted away from myself, back to splendid nature. I held pine needles under my nose, looked closely into the cups of yellow flowers, and paused at a towering oak. How many creatures had rubbed their antlers against it, ate its acorns, scurried up and down its trunk, whistled and hooted from its branches? 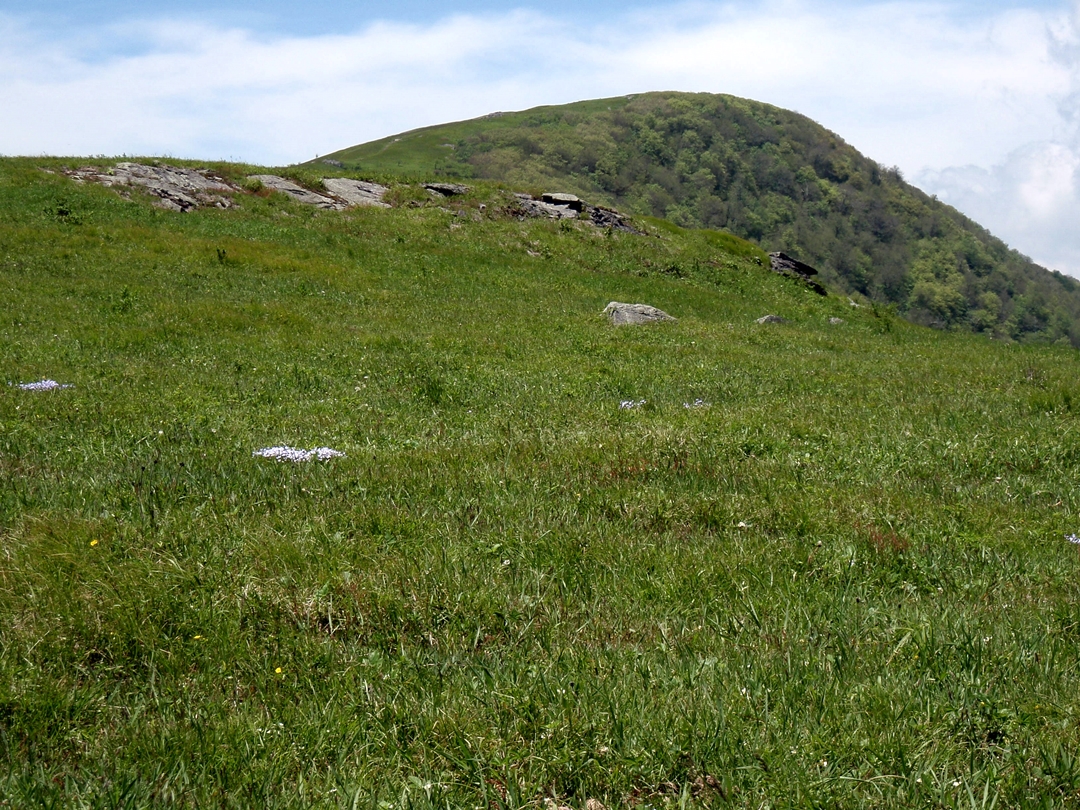 Almost to the top of Hump Mountain

Trees gave way to grass on the bald top of Hump Mountain. I sat down and removed my boots and socks so my toes could sway in the breeze with the tall grass. Beyond the bald, mountains rose to eternity, layered one behind the other, in varying shades of green in the foreground to hazy blues in the distance. Voluminous clouds cast rolling shadows as they drifted across the blue sky. I lay back and closed my eyes, feeling the sun’s warmth on my eyelids. A bee sampled purple-flowered clover next to me. His buzzing was the only sound holding me to earth. 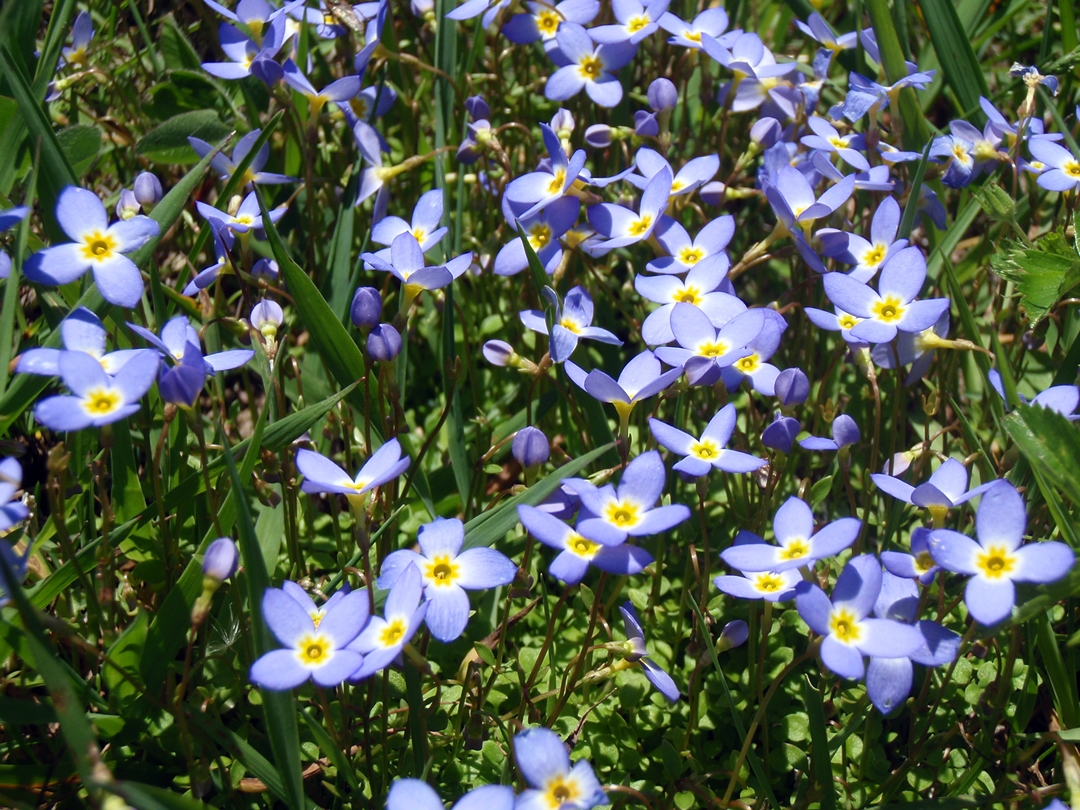 Bluets graced the bald. Each flower had a yellow center outlined in white with yellow rays extending toward the blue petals—looking like little suns. 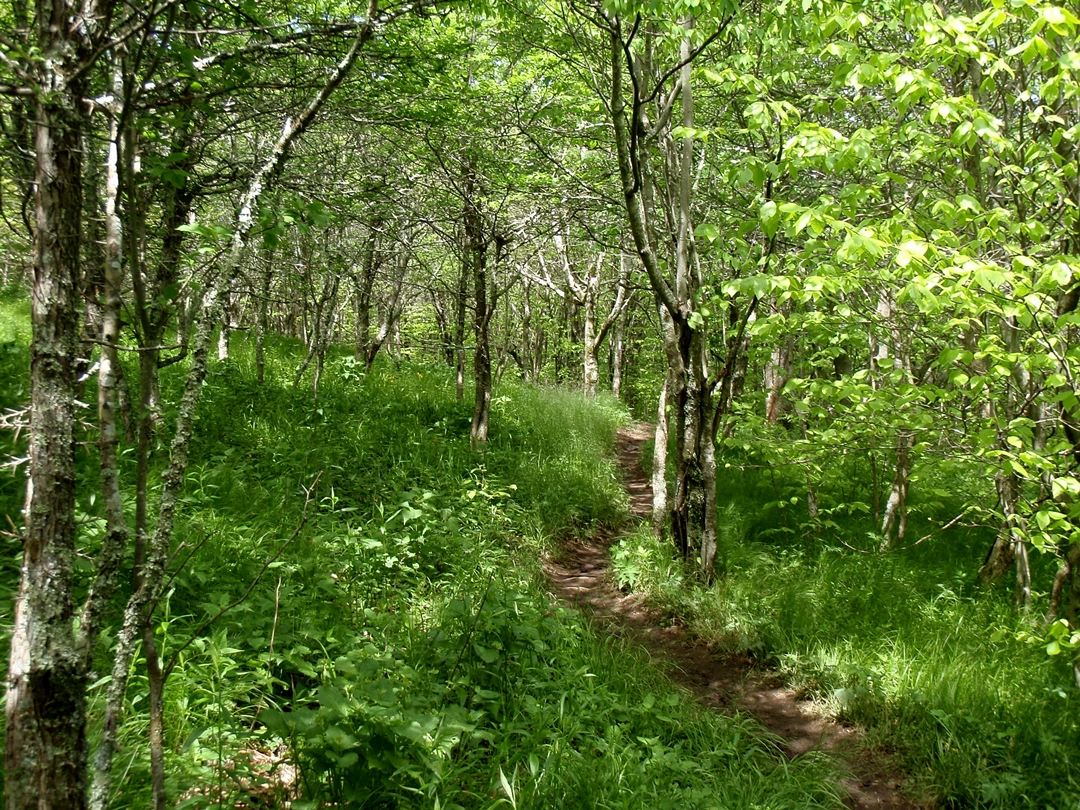 After Hump, I hiked a mile down to Bradley Gap and then a mile up to Little Hump Mountain, which was almost as high as Hump. Between the two balds, the trail passed through a section of small beech trees. Wavy green grass covered the ground underneath the trees. The scene would have been as inviting in winter as beech trees hang on to their dead, quivering leaves until spring. I lay down again on Little Hump Mountain. Two vultures circled overhead, hoping I might expire. But I was very much alive—and well. 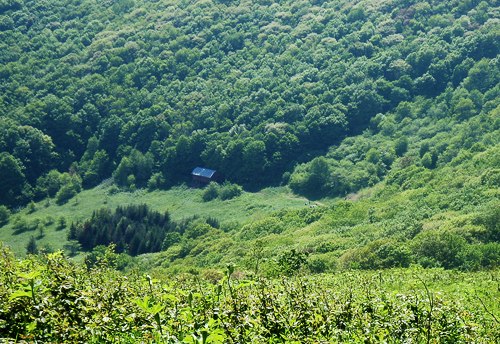 Looking down from trail at Overmountain Shelter, aka The Red Barn

From Little Hump Mountain it was a mile and a half down to Overmountain Shelter, aka The Red Barn. Boy Scouts had converged on the place, but most were tenting in the open field on the approach to the shelter. Others hung hammocks among a grove of spruce trees. The barn’s loft was expansive and dark. Wind blew in through a large opening at one end and through spaces between the boards. I cooked cheddar-herb chicken and a side of beets for supper with milk and cookies for dessert.

It was cold, so I wore my fleece jacket in my sleeping bag. A man in the corner snored so loudly that my eardrums vibrated as much as his nose. He went silent occasionally, but that was followed by awful gasps, like a man saved from drowning. Then the nasal roaring resumed with a vengeance. It thundered outside the barn as well—a storm rolled in, adding dampness to the whistling wind. The night was long and loud, but it sure had been a glorious day.

Update: I now prefer wearing a down jacket for better warmth, lighter weight, and tighter packing.