My food survived the night. I cooked apple-cinnamon oatmeal topped with granola. Eddie ate two teaspoons of instant coffee—straight up, no water. I said, “Isn’t that a little bitter?” He said he didn’t mind because it really got him going. Eddie shouldered his pack and zipped off to the north. I headed south in light rain. The temperature was cool. Birds were singing. Flame azaleas bloomed along the trail. Raindrops dripped from the orange flowers and glistened when the sun came out. As I passed through a pasture, the sun bore down from its eleven o’clock tilt. Steam rose from the grass. Back in the woods, I filtered water from a stream and splashed the coolness on my face. 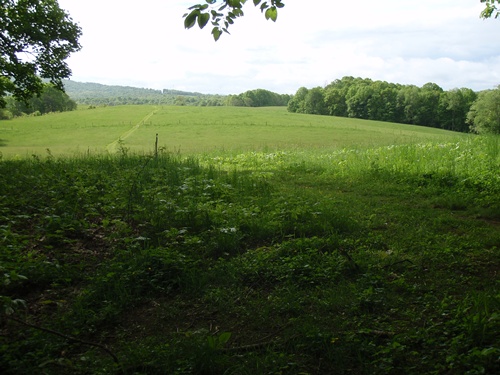 The first half of the day, I walked two miles downhill, two miles level, and three miles gradually uphill to Iron Mountain Shelter, where I ate lunch with two thru-hikers, a young man and woman named Eats-A-Lot and SNP. I cooked Spanish rice with ground beef and tomatoes and spooned it over slices of cheddar cheese in a tortilla. SNP sat at the table with me and scanned her guidebook for an all-you-can-eat restaurant in Damascus. Eats-A-Lot reclined in the shelter behind me and farted, grandiosely. I said he should change his name to Farts-A-Lot. He talked about forming a utopian village when he finished his hike, presumably a place where people ate a lot of beans. 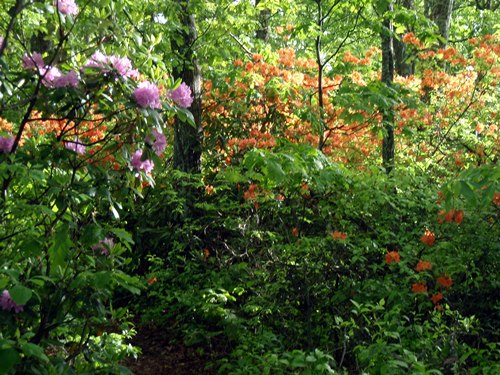 The next seven miles to Vandeventer Shelter were no harder than the first seven, but as the day grew long, my legs grew tired. In the weeks leading up to the trip, sitting comfortably with my itinerary on the computer screen, I planned daily-mileage goals without consulting the two workhorses under the desk. Seventy percent of the days called for pulling fourteen to nineteen miles. Did I overestimate my horsepower? The last mile of trail leading to the shelter was through rhododendron and flame azaleas in full bloom, which helped me forget I was tired.

Vandeventer Shelter bustled with boy scouts early evening. They were boiling water for freeze-dried meals, so I joined them and cooked macaroni and cheese with ham and mixed vegetables with pineapple upside-down cake for dessert. After supper, a boy sat with me on a boulder behind the shelter to watch the sun go down over Watauga Lake, way down in the gulf of the mountains. He said he wished his father could see this, but his father had stayed home. The boy said he was probably watching television. It was getting dark, so he went back to his friends who were settling into tents. One adult leader shared the shelter with me. When the boys quieted down, the faint sound of fishing boat motors rose from the lake. I thought about my father and both grandpas who had taken me fishing. For a moment, I was back in the boat with them.