After cooking grits with ham and peas for breakfast, I filtered water at the piped spring. Somebody had washed oatmeal out of his or her pot. No wonder the bear likes this shelter so much. After a short, steep climb, the next three miles to Newfound Gap went mostly downhill. Two small bears ran across the trail right before the parking area at the gap.

On September 2, 1940, President Franklin D. Roosevelt, speaking at the Rockefeller Memorial in Newfound Gap, dedicated Great Smoky Mountains National Park. Half the money raised to purchase land for the park—five million dollars—was donated by a Rockefeller philanthropic fund. The state legislatures of North Carolina and Tennessee contributed two million each, and one million was raised from small private donations.

Much of the park’s initial facilities and trails were built by young men from the Civilian Conservation Corps (CCC), beginning in 1933. The CCC work-relief program was a cornerstone of Roosevelt’s New Deal to help the nation recover from the Great Depression. Three million young men, including my Grandpa Parker, joined the CCC over the nine years it operated.

While dedicating the park, “for the permanent enjoyment of the people,” Roosevelt’s speech struck an ominous tone as he used the occasion to prepare the nation for its entry into World War II, which came on December 7, 1941.

The cars and motorcycles swarming at Newfound Gap ruffled my senses, so I passed through and back into the woods like an unseen ghost. Soon I met Brian Davidson, a PhD student from the University of Maryland. He was studying an isolated population of black-capped chickadees in the Smoky Mountains. Brian stretched a mist net across an open spot along the trail with a stuffed eastern screech owl perched at the bottom. He played recorded distress calls of chickadees. If any chickadees were in the area, they would try to chase the owl away and would inadvertently fly into the net—to be released after a band was put on a leg and a DNA sample was taken. While we talked, a dark-eyed junco flew into the net. The junco responded to the recorded distress calls of chickadees, demonstrating a defensive alliance between the little birds. 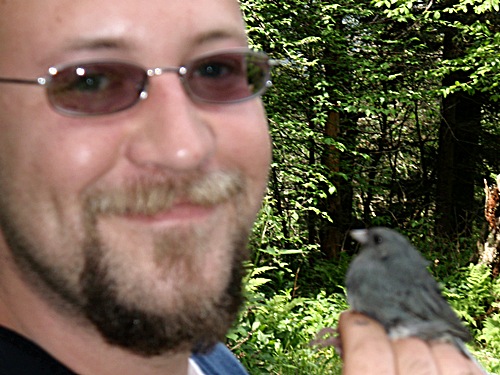 I walked another seven miles uphill to Clingmans Dome. It was fogged in, so I didn’t walk up the circular concrete viewing tower, which marks the highest point on the Appalachian Trail at 6,643 feet.

The last three miles to Double Spring Gap Shelter were downhill, but the trail was rocky. I shared the shelter with Jamie and Chipper, a couple of nice men from Nashville who were at Icewater Spring Shelter with me the night before. I cooked spicy mac and cheese with peppers and tomatoes, plus a side of asparagus, and apple pie for dessert. 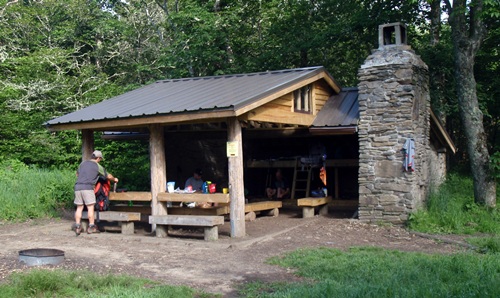 Double Spring Gap Shelter sat right on the Appalachian Trail with a grassy area in front. As dusk arrived, three deer grazed with little concern for us. 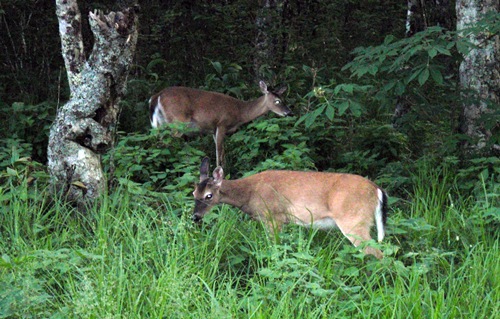 During the night, chipmunks jumped on the roof of the shelter and ran across, again and again, in a game of chase.