The deer grazed in front of the shelter again in the morning. The sky was dazzling blue and fresh at the high elevation. Chipper gave me freeze-dried blueberries, which I added to my oatmeal with peanuts and chocolate. Double Spring Gap Shelter was spacious like the other shelters in the Smokies with a solid-rock fireplace on one side. I lingered past 9:00 a.m. to enjoy the serene morning. Birds flitted branch to branch, signaling their locations with sweet notes. 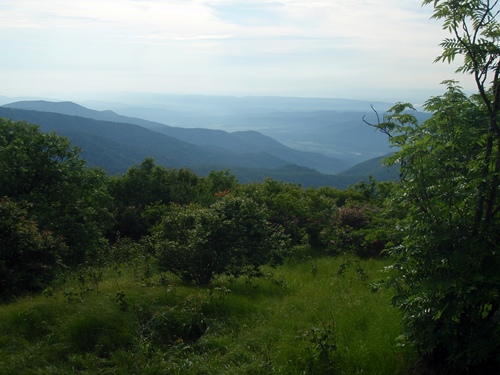 The first seven miles of the day were level over firm trail with gentle ups and downs. The steepest ascent was a short one, to Silers Bald, where I walked across a meadow of green grass, wildflowers, and shrubs under wispy white clouds. Mountains receded one behind the other, acquiring lighter shades of smoky blue with distance, until the top of the last mountain was indistinguishable from the Carolina sky. 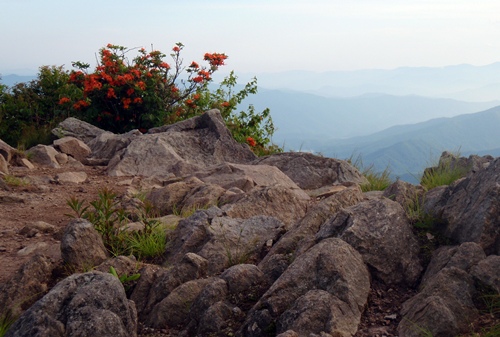 Five miles from Derrick Knob Shelter, where I stopped for lunch, I ascended steeply to the intersection of heaven and earth at Thunderhead Mountain and Rocky Top. Rhododendron and flame azaleas bloomed brightly against the sky—yes, that brilliant sky again—so prominent today. Sandstone boulders jutted out of sandy soil—cast up from ocean sediment a billion years earlier. I sat on a weathered rock, tipsy from the mountain air, marveling at the beauty, not wanting to leave. A sobering thought entered my mind that my time in the mountains would end in a few days.

I dawdled the last mile and a half through stands of mature ash and oak trees. Along the trail, wild hogs had rooted up the soil, looking for grubs and tubers. I had heard that a ranger had hunted hogs a few nights before, since hogs are active at night. Nonnative hogs, whose domesticated ancestors had escaped and gone wild back in settler days, destroy sensitive vegetation and compete for food with native species, such as turkeys. 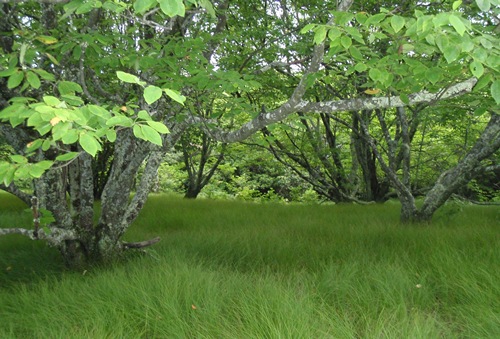 At a flat stretch, a peahen crossed the trail in front of me. She had chicks nearby and was leading me away from them. I tried very hard to take her picture, but she outmaneuvered me. Swaths of wild blueberries and blackberries grew along the trail. The bears would be happy when the berries ripened. The final approach to Spence Field Shelter was past short trees widely spaced over waves of tall green grass.

The shelter was close to a full house. I claimed a spot along the wall and cooked beef stroganoff for supper. One of the guests came back from the spring and said there was a bear hanging around. Needing water, I asked a few campers to walk down to the spring with me. The bear was still there, but he lumbered farther into the woods. It was too dark to take a photo of him from a distance. Later, I was told that park bears might approach a flashing camera rather than run away. They have learned that humans throw food at them in order to get a picture. Another story was that some bears in the park try to catch the rocks that people throw at them, thinking it might be food.