A pot of hot apple-cinnamon oatmeal was a good start to a rainy day. The first mile was muddy and slippery up to Big Bald. 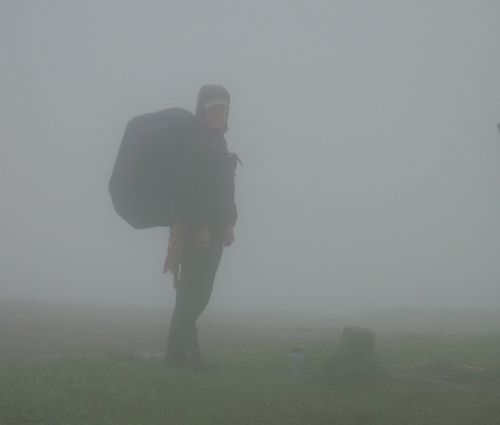 When I got to the top, I saw the silhouette of a backpacker standing in the midst of dense fog. Her name was Kendra, from Nashville. She was section hiking the Appalachian Trail a week at a time with a couple of male friends. They were behind her today. She said it was better to be on the trail in fog than to not be on the trail at all. I asked if I could take her picture with her backpacker profile in stark relief against the fog background. Kendra agreed it would make an interesting shot. She took a photo of me also. We chatted a few more minutes, and she said she would send me an email when she finished her hike so we could exchange photos. 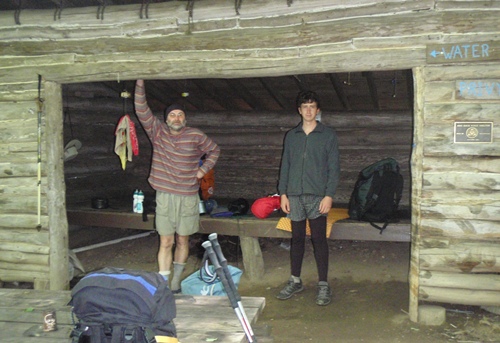 From Bald Mountain, it was mostly downhill to Hogback Ridge Shelter, a three-sided log hut. The water source was a half mile round trip from the shelter. Handling the cold water and losing body heat to cooling evaporation sent shivers through me. I quickly changed out of damp clothes back at the shelter. Two section hikers from Kentucky and Indiana were already at the shelter. Randy cooked a tasty-looking supper consisting of a box of cheesy shells, a pouch of salmon, and a can of corn. He mentioned he had once added a Snickers bar to macaroni and cheese. Skylar snacked on granola since he had already eaten supper. I cooked lasagna with a side of ratatouille and vanilla pudding with graham crackers and warm bananas for dessert. Randy had thru-hiked the Appalachian Trail ten years earlier. He was out for two months this trip and said he was taking it slow this time, “to see what I rushed past the last time.” Randy and Skylar rolled cigarettes after supper.

Several wet, muddy hikers arrived after dark, filling the one-level shelter to capacity. I was the sardine against the wall. Above me, a mouse scurried along a narrow ledge between two logs, surveying the possibilities. One man forewarned us about his snoring, and we all agreed it might serve as a bear deterrent. Unfortunately, it was also a sleep deterrent—I pulled my sleeping bag over my head and stuck my nose out occasionally for air.

Near No Business Knob Shelter to Bald Mountain Shelter