I cooked grits with tomatoes for breakfast and went to the hostel’s lobby to send emails, have a cup of coffee, and top off my fuel bottle. Hattie, the proprietor, said she chose the name Moosepac Lodge for the bunkhouse because Moosepac was the name of a lake up north where her great aunt owned cabins. Hattie had helped open and close the cabins in spring and fall when she was young. Love of camp life inspired her to open Hemlock Hollow. Hattie shuttled me back to the trail in the golf cart. A.T. followed behind the cart and took my seat on the way back.

The first two miles through Allen Gap were flat and easy, but then the trail went up steeply—along with the heat and humidity. My dry shirt morphed back into a wet rag. The trail weaved accordion-like in and out of the coves of Spring Mountain with a repeating pattern of sun and shade. Where the coves had favorable orientations to the sun, they bloomed white with mountain laurel. 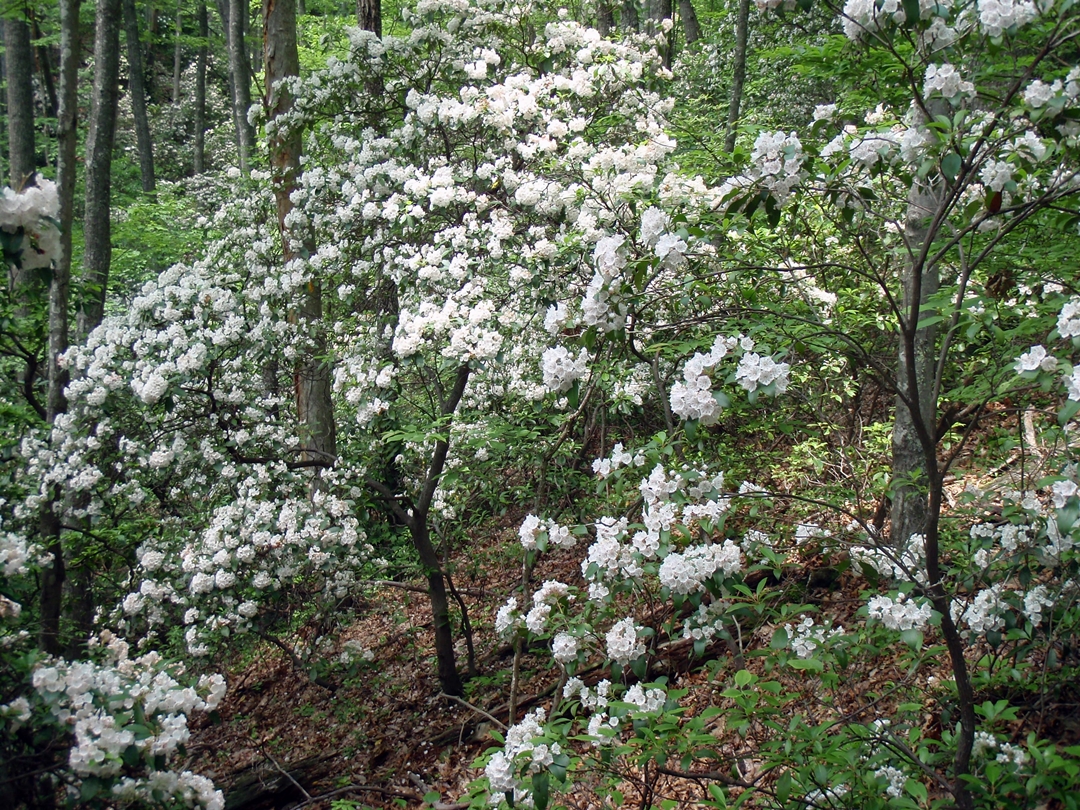 Spring Mountain Shelter looked like a convenient spot to eat lunch, but the place was inhabited by aggressive gnats. A young man, midtwenties, sat on the picnic table, scratching welts on his arms and neck. I gave him a bug-repellent wipe. He brought up the topic of turning his life around. Alcohol addiction was hurting him and his family. I mentioned Alcoholics Anonymous, since I knew people who had found help through the twelve-step program. He had been to a few meetings but was skeptical it would work for him. I encouraged him to keep an open mind and not give up, that his life was valuable and worth fighting for.

His older brother-in-law was hiking with him but had lagged behind. I met him down the trail just after he had fallen into poison ivy. He was a big guy—out of breath, flush faced, and sweaty. I was glad to hear he was only hiking three to four miles a day and not pushing for a heart attack. Like his younger brother-in-law, he was hoping time in the woods would help break his addiction—junk food in his case. I told him it was great the way he and his brother-in-law were supporting each other. We shook hands, and I wished him well. 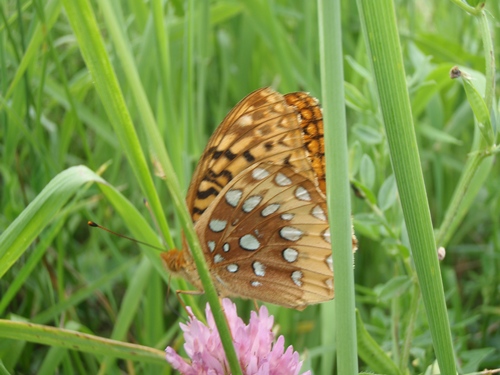 The trail descended a mile from Spring Mountain Shelter and then went up a mile to almost the same elevation at Rich Mountain Lookout Tower. Straddling the NC-TN line, the steel-beamed tower had a wooden deck and unmanned cabin at the top. The glass had been removed from the windows, through which I viewed the mountains in glorious panorama. The town of Hot Springs, North Carolina, was visible down in the French Broad River basin, eight miles away by trail.

It was shaping up to be a long-mileage day. I filtered water at numerous springs along the way. After a short, steep climb up from Tanyard Gap, I cooked ratatouille by a small pond with a bench. The dam was constructed of cement rather than earth; it was probably a millpond rather than a farm pond. The water was green with aquatic plants and algae and appeared even greener as it reflected the rhododendron and trees around it. Three turtles lined up on a log in the pond. A largemouth bass stalked the shoreline. 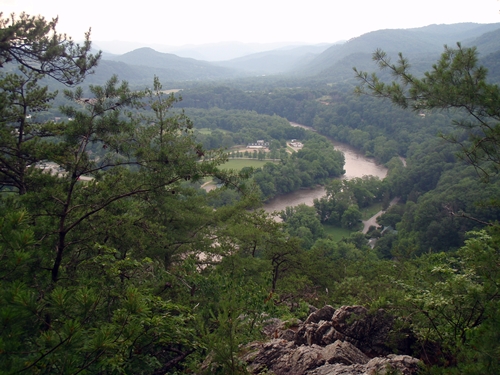 Looking down at French Broad River in Hot Springs

The last mile approaching Hot Springs was similar to leaving Erwin—a view from rocky precipices looking down at a big river with the sound of a train rumbling through town. Switchbacks made the steep descent from the craggy side of the mountain easier. A misstep at Lovers Leap Rock would have been a quick and fatal way down. Where rocks had weathered, patches of sandy soil supported desert-like plants that were creamy green and purple—beauty amid a rugged ecosystem. I reached the French Broad River early evening, followed the trail upstream, crossed the bridge, and then walked past the shops and cafes in downtown Hot Springs. The Duckett House was on the other side of town. 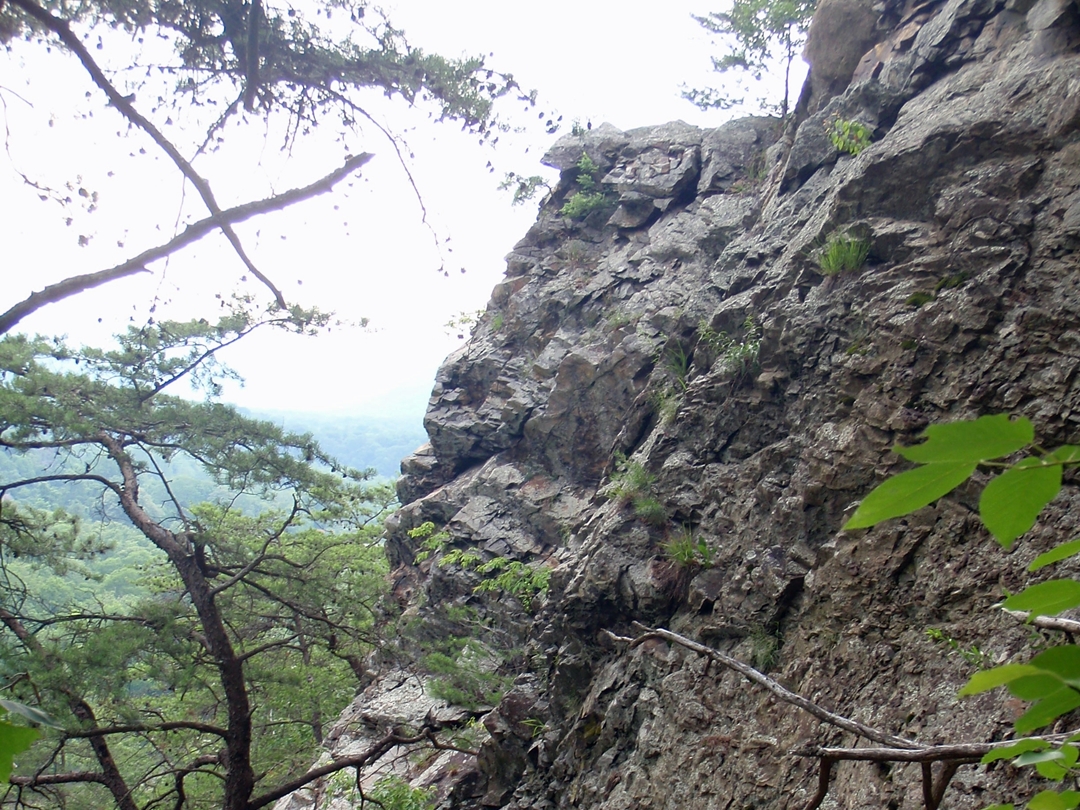 Duckett House, circa 1900, was a beautifully restored bed-and-breakfast. I stayed in the hiker bunkhouse across the yard, past the garden and roaming chickens. There was no bathroom in the bunkhouse, so I went back to the house to take a shower and do laundry. If there were an award for best bathroom, Duckett House would have won it. It was fully tiled with sparkling-clean faucets, thick towels, and assorted lotions and sprays. I came out a new and better-smelling man. The owner let me use the phone to call my father and daughters. It was nice talking with dad, but I had to leave voicemails for my daughters. Speaking with the owner again, I said it was hard to walk on pavement after being on the trail so long—hoping he would offer me a ride back to town for supper. No luck. I walked to the Rock Bottom Bar and Grill and ordered wings, salad, a hot ham-and-cheese sandwich, and a beer. There was music on the deck, which I enjoyed, but one ear listened to Spring Creek going by. Back at Duckett House, I picked up the guitar in the parlor and played a few songs quietly—so as not to wake the guests upstairs. Then I walked back to the bunkhouse in the moonlight.