The raspy rooster—that farm animal who starts the day complaining—woke me before sunrise, so I went to town early for breakfast at the Smoky Mountain Diner. The waitress, who called me honey, kept me refilled with coffee until the library opened. I used the library’s computer to send emails to friends. Since I wasn’t going to make it all the way back to Georgia, I had to find someone who could fetch me in eleven days at the Nantahala Outdoor Center in Wesser, NC. It was noon when I got back in the woods. The trail was dry and smooth, uphill for the first two miles, and then leveled with shorter inclines over the next four miles. The ridgetops were above the trail, so views were infrequent.

A pleasant breeze blew around a bend late afternoon, so I sat down in the grass by the trail and ate ramen noodles with vegetables and black beans and peach cobbler for dessert. I ate it dry without cooking any of it—a hiker I passed earlier said there was a food-thieving bear in the area, so I thought it best not to alert him with a smoke signal from my pot. At Garenflo Gap, where the forest-service road cuts through, someone had left a large Rubbermaid container that had been filled with water bottles and snack foods, probably to resupply a group. It appeared the lid had been secured with the bungee cord that was now lying next to it. A bungee cord looks like a picnic-basket handle to a bear. The area was littered with empty bottles, bags, and wrappers—remnants of a bear feast. A few hundred yards down the trail, I saw bear scat in the middle of the trail with a Snickers-bar wrapper in it. 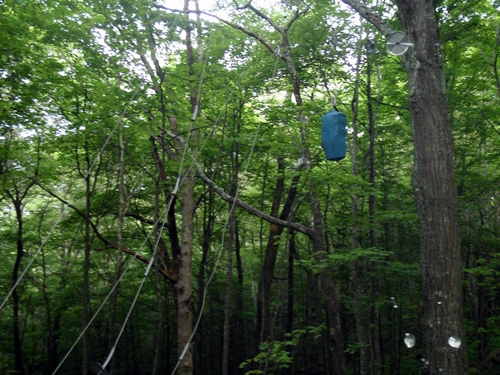 The last six miles to Walnut Mountain Shelter were up and over Bluff Mountain—a steep, tiring climb on a hot, humid day. The old log shelter was a step off the trail on a gently sloping knoll. The trail proceeded west up the knoll, aligning perfectly with the sunset. A couple of men, late fifties, were cooking, so I abandoned my plan not to cook and joined them—Hawaiian shrimp and rice with a side of broccoli. There was no picnic table, so I cooked on the ground next to one of the logs lying by the rock fire ring. I had just enough water to fix supper with a few ounces left for breakfast. The men said the water source, which was a ways off, was dry. I hung my food bag from the bear cables and sat around a crackling fire with the men. Mike and Dave were old friends, living in different states. They got together every few years to backpack. Mice were active in the shelter during the night.