The rain let up shortly after breakfast—ramen noodles from Mountain Harbour Hostel. I saved my sweet potato bark, nuts, and raisins for walking. The three-mile ascent up to Grassy Ridge Bald was rocky, rooty, muddy, and puddly. I emerged from tree cover into open grass. The eroding forces of hiking boots and flowing water had turned the trail into a narrow trench that was difficult to walk in or along. Walking on the ridge, my right foot was in Tennessee, my left foot in North Carolina.

The Roan Highlands had started back at Hump Mountain, where I left my back pain behind. Now, I was hiking the other half of the highlands. Grassy Ridge was the first of three successive balds that I crossed over the next two miles. I could see the trail ahead for a long way—to Jane Bald and then Round Bald. Interspersed among the grass were lone boulders and flat slabs of rock, thickets of rhododendron, wild blueberries, and a smattering of spruce trees. The trail often followed along the crest of a knob with the meadow sloping away roundly to both sides. On the balds, the blue sky itself was an all-encompassing feature as it swept over the distant mountains. 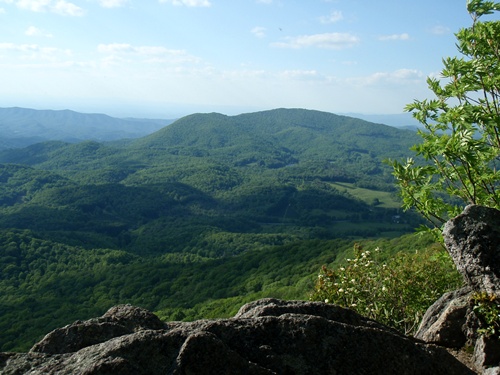 After dropping a short ways to Carvers Gap, I climbed back up again, this time to Roan High Knob Shelter, the highest shelter on the Appalachian Trail at over six thousand feet. Unlike most shelters, which are open on the front side, Roan High Knob Shelter was a fully enclosed log cabin with a front door and windows. It had a large loft, which overhung the front area like a covered porch. The shelter was nestled in among spruce trees, which favor the alpine environment of the highlands. I cooked lunch there—corn-bark stew. 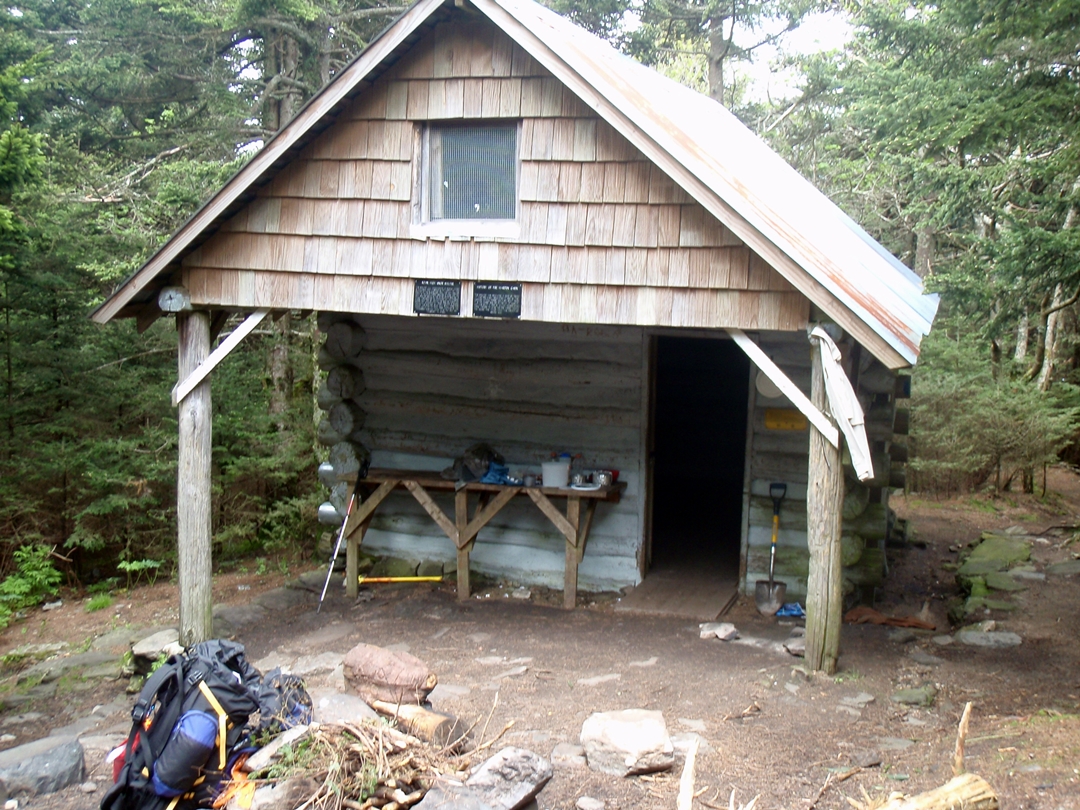 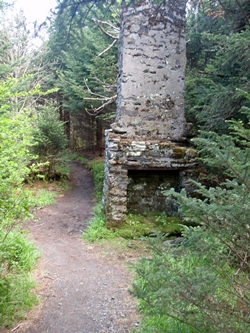 Back on the trail, I walked by an old rock chimney—the trail passed right through where the old house used to stand. Not a board remained. Whoever had lived there had a good supply of resinous spruce heartwood around the house to stoke hot fires on cold highland nights.

The next five miles descended over rocks and roots, followed by a five-mile climb up and over Little Rock Knob. I broke into spontaneous yodeling when a level, smooth stretch opened up. Three hikers coming toward me moved off the trail to let me pass—like I might be dangerous.

As I got closer to Greasy Creek Friendly hostel, a grove of Fraser fir trees along the trail smelled like Christmas. 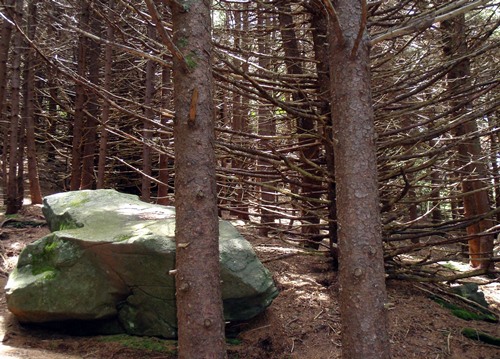 It was almost dark when I got to the hostel—an old house with weathered-gray siding and a tin roof. I had heard from another hiker that the proprietor, Cee Cee, makes you wash your hands as soon as you enter the house and before you sit down at the table. Cee Cee welcomed me at the back door and invited me to take off my boots and wash my hands. The bathroom and washing machine were located off the mudroom, such that one’s hiker grime can be removed before venturing farther into the house. This was her home after all. I was happy to recivilize myself while in Cee Cee’s care. The gravity-fed shower delivered little more than a trickle, but it was hot, and Cee Cee said I could stay in there as long as I wanted. She washed my clothes with a splash of vinegar to get the stink out. I was getting some mothering—and I appreciated it. Though nearly bedtime, Cee Cee fixed me a cheeseburger and salad with feta cheese. The kitchen floor was decorated with painted footprints of hikers. She called the place Greasy Creek Friendly because she was friendly to hikers—simple as that. I slept in a bedroom in the house rather than in the bunkhouse out back.