I ate pumpkin-pie bark for breakfast—goes in like a chip and down like pie, no cooking required. The guys from New Jersey gave me a cup of coffee, and I got an early start. A corridor of grass, blackberry shoots, and stalky weeds with yellow flowers lined the half mile of trail leading up to the grassy bald at Beauty Spot Gap. It would have been a nice spot to camp and watch a sunset and sunrise over the mountains. There was a ring of charred rocks showing where others had camped. Unfortunately, they left food packaging behind—expecting the next campers to burn it rather than pack it out themselves. 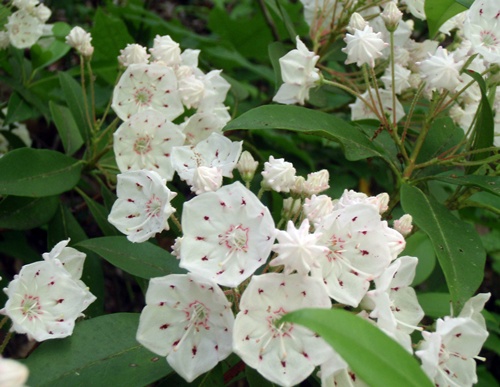 The trail continued downhill for another three miles in close proximity to Jones Branch. I crossed the stream eleven times on the way to the Nolichucky River. Lush ferns grew in the moist drainage channel, as did mountain laurel, occasionally curling over my head into tunnel-like passages. The mountain laurel was freshly bloomed—the ten spring-loaded stamens inside each white parachute-shaped flower had yet to be sprung by pollinating bumblebees. After descending one more mile, I crossed the bridge over the Nolichucky River and walked a short ways to Uncle Johnny’s Nolichucky Hostel. 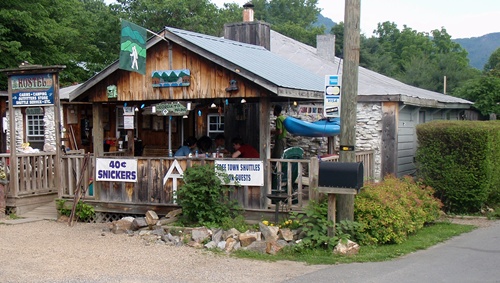 I had hurried the last mile to reach Johnny’s in time for the supper shuttle into town, but I was too tired to go when I got there. A group of thru-hikers sat at the table on the front deck. They had extra food from a convenience store and offered me as much as I wanted. I selected a ham-and-cheese sandwich and two corn dogs. In addition to that, I downed a Gatorade, a Yoo-hoo, and one of Johnny’s famous forty-cent Snickers bars. Beer lubricated the festive mood on the front deck, but I was too pooped to party. I washed clothes, took a shower, and fell into bed in a little cabin around back.