How to Make Bean Bark

Photo above: Making bean bark. Vegetarian baked beans  were run through a blender, spread thinly on dehydrator tray, dried to a crumbly texture, and used in a delicious backpacking meal. Recipe below.

Bean bark rehydrates well with hot water and lets you create flavorful and saucy backpacking meals using any kinds of beans plus extra flavors such as BBQ sauce, salsa and enchilada sauce.

Here is a simple way to turn baked beans into a delicious meal:

Run a 28 ounce can of vegetarian baked beans or an equivalent quantity of homemade beans through a blender until creamy. Use all the liquids from the can. Avoid using baked bean products containing bacon or pork because fatty meats will not dehydrate well and may spoil.

Dry at 135°F (57°C) for eight hours. Unlike Potato Bark, which dries into a sheet, Bean Bark dries like mud… full of cracks.

After about six hours or when the bark is dry enough to pull off the trays, flip it over to expose the moister bottom side to the hot air.

Yield: 28 ounces of beans will bark down to three cups weighing seven ounces.

Disclosure: BackpackingChef.com participates in the affiliate program offered by Excalibur Dehydrators. If you make a purchase after following the above link, I may receive a commission. Thank you.

* Ground turkey or chicken, or ham, may be substituted for ground beef to add variety to meals.

Pack all dry ingredients in a plastic zip style bag.

Combine all ingredients with water in pot and soak for five minutes.

Light stove, bring to a boil and cook for one more minute.

Remove from stove and transfer pot to insulating cozy for ten minutes.

Stir briskly before eating and the bark will dissolve into tasty gravy.

Roll all this tasty goodness up in a couple of tortillas. Messy, but very good. 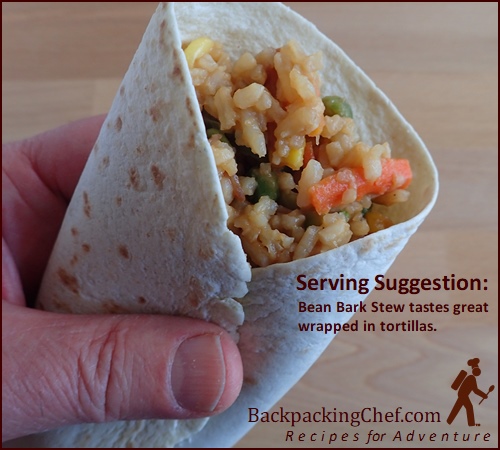 Above: (L) Black Bean & Salsa Bark Stew, (R) Enchilada Bean Bark Stew (It tastes a lot better than it looks in the photo).

Return to: How to Make Bark Table of Contents