Pressure Cooking Chicken & How to Dehydrate It

After you dehydrate chicken, it does not completely rehydrate back to the tender condition it was in before you dried it. Pressure cooked and dried chicken will be chewy, comparable to dried canned chicken, but much easier to chew than dried chicken that was cooked any other way. When combined in a meal with rice and vegetables, the different textures make the meal interesting.

Chicken Jerky Bonus: For a quick high-protein snack on the trail, this recipe makes a delicious and crunchy chicken jerky.

How to Pressure Cook One Pound of Chicken Breast Meat

This pressure cooker chicken recipe is for approximately one pound +/- an ounce or two of chicken breast meat (approx. 500 grams).

Breast meat is low in fat which makes it better for storage than the fattier thighs and legs.

A Small Potato – The Secret Ingredient

When high-protein foods like meat or scrambled eggs are dehydrated, they lock up and don’t want to take back much water when you rehydrate them in a meal. Incorporating starch into the protein helps it rehydrate much better. That’s why I add breadcrumbs to ground chicken and ground beef, before cooking and dehydrating.

This Kuhn Rikon pressure cooker has two pressure settings, low and high, indicated by the red lines on the gauge at the top of the pot. The first red line pops up at low pressure and the second when high pressure is reached. Use high pressure for both the potato and the chicken. 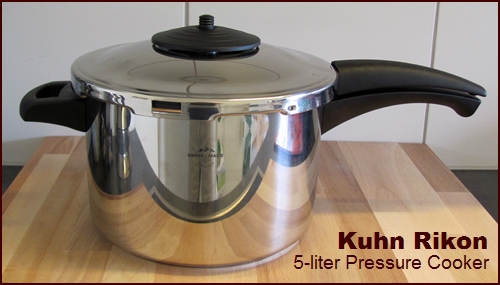 Cut the chicken into strips to open up more surface area for tenderizing and infusion of starch and flavors.

Tenderizing breaks down some of the cell walls in the protein which improves its ability to reabsorb water in a dehydrated meal.

Place chicken pieces between parchment paper and bang on them with a tenderizing mallet, or hammer, as shown. Go ahead… get out some of those aggressions. It will look like your hammer is going right through the meat, but it will still hold together while being thinner when you are done.

By now, the pressure cooker with the potato will have cooled. Remove the lid and mash the potato with a potato masher including all the liquid in the pot.

Add the hammered chicken to the pot.

Aromatic ingredients in the pot with the chicken and potato-thickened liquid.

After preparing the potato broth and chicken as previously described, add the rest of the ingredients to the pressure cooker and stir, pushing the herbs down into the liquid and distributing the lemon juice.

Pressure cook for ten minutes once high pressure is reached.

Set pot aside and allow pressure to release on its own rather than using a quick pressure release. It took ten minutes for the pressure to release from my Kuhn Rikon pressure cooker. Had I wanted a quick release, I would have simply pushed down on the gauge with a long spoon. 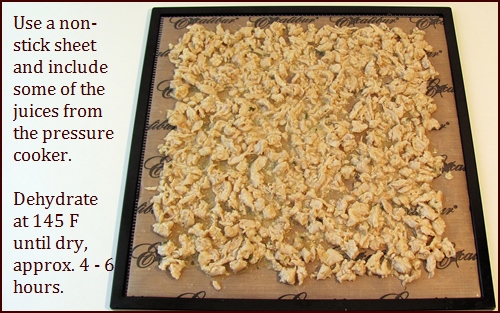 Remove meat from pressure cooker with tongs and pull apart into smaller pieces with fingers. Remove any ingredients that may have merged with the meat, but it doesn’t harm to leave a few bits of the herbs.

Spoon some of the flavorful liquid from the pressure cooker over the meat on the tray.

Store in an air-tight container for short-term storage of a few weeks, vacuum seal for storage up to six months, or freeze for long-term storage greater than six months.

Dried pressure cooked chicken. Use in meals or eat it dry as crunchy chicken jerky.

This pressure cooking chicken technique is included in Recipes for Adventure II: The Best of Trail Bytes.

Hi Chef Glenn, great site! I am from Australia and a hiker - although we call it bushwalking here. I have stumbled across an easy method of pressure cooking chicken for dehydration that comes out moist when rehydrated in trail meals. 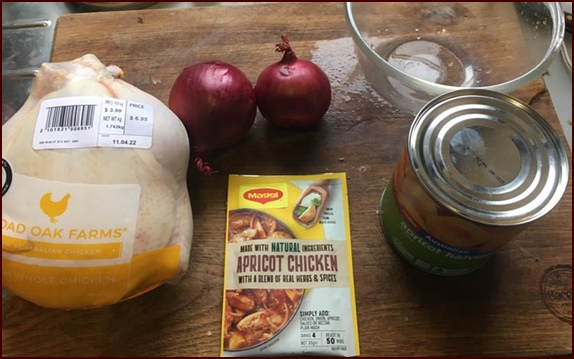 Skin a whole chicken and break into pieces: thighs, breasts, wings, and drum sticks. No need to pound them with a hammer. 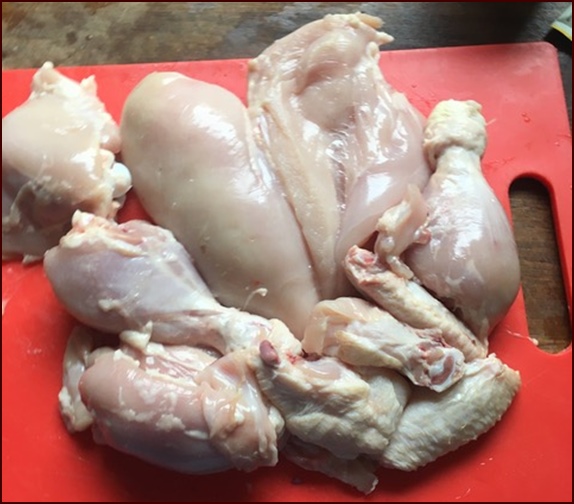 Put the pieces into a pressure cooker with a dry seasoning mix of choice (mushroom stroganoff base; apricot chicken base; or chicken chasseur).

Include other items suggested on the seasoning mix packet such as onions, apricots, mushrooms, etc. 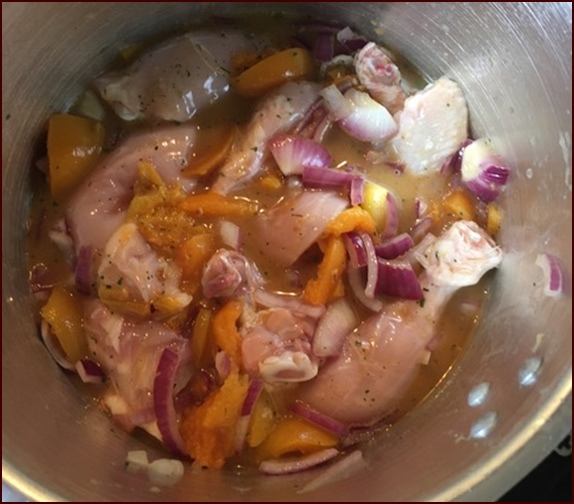 Heat the pot up to pressure and pressure cook for ten minutes. Then let it rest fifteen minutes with the lid on. 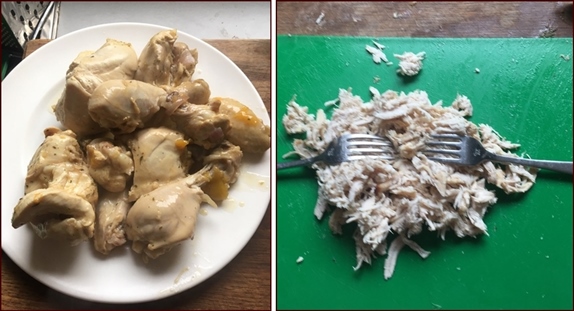 Take the chicken pieces out and shred them with two forks, but put the wings to the side because they have too much fat and skin on them. The more shredded the better. 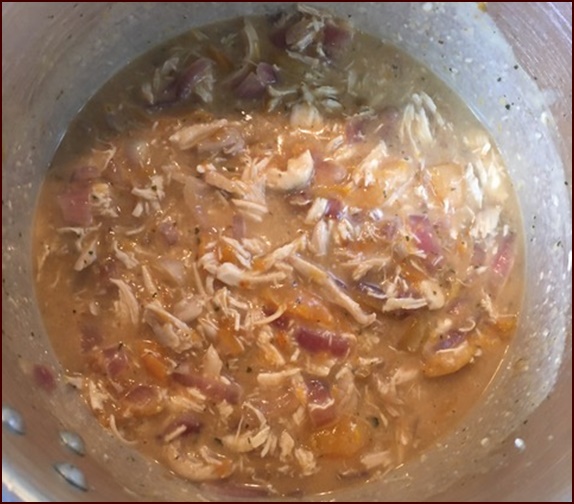 Put the shredded chicken back in the pot. Heat up again and thicken with cornflower dissolved in water. 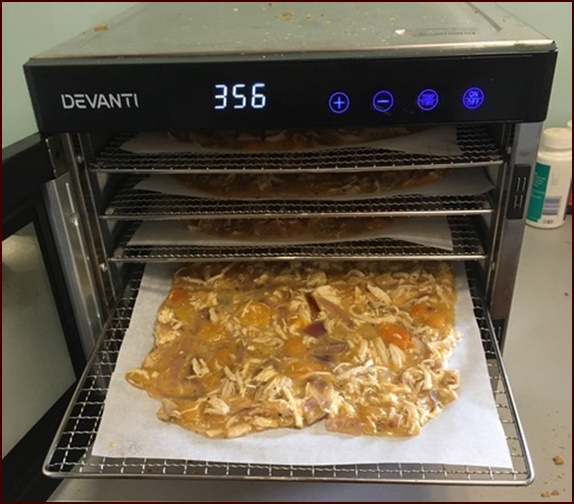 Spread pressure-cooked chicken mixture on nonstick sheets or baking paper/parchment paper. Begin dehydrating at 63°C (145°F) for four hours. Then break up and spread out on the trays further. Dehydrate for approximately four more hours until dry.

Pour boiled water in a thermos food jar first, and let it absorb that heat. Then tip out. This preheats the thermos which helps ramp up the heat. Put in your meal, then add boiled water again to cover ingredients. After twenty minutes, it comes out hot like it was not even dehydrated.

Alternatively, place meal in a pot with water to cover. Let soak for five minutes, then bring to a boil for a minute or two. Transfer pot to insulating cozy for twenty minutes.

I have also just pressure cooked chicken pieces in chicken stock and herbs, and then shredded the chicken and dehydrated just the chicken. Shown below. 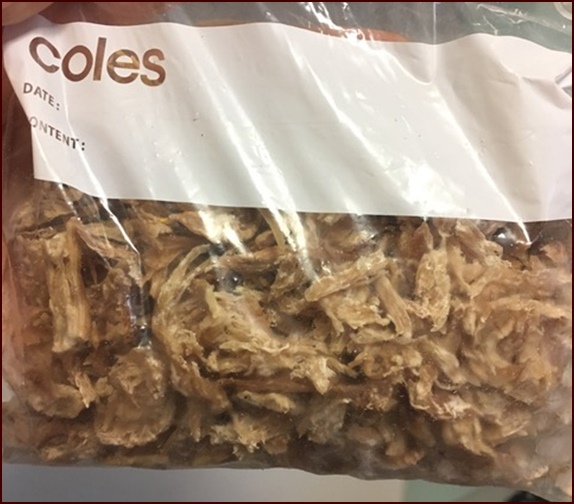 Photo below shows a rehydrated pasta backpacking meal which has dehydrated shredded chicken in it. It helps to eat the chicken with sauce. Mixing gravy or a powdered curry sauce with rehydrated chicken works well. 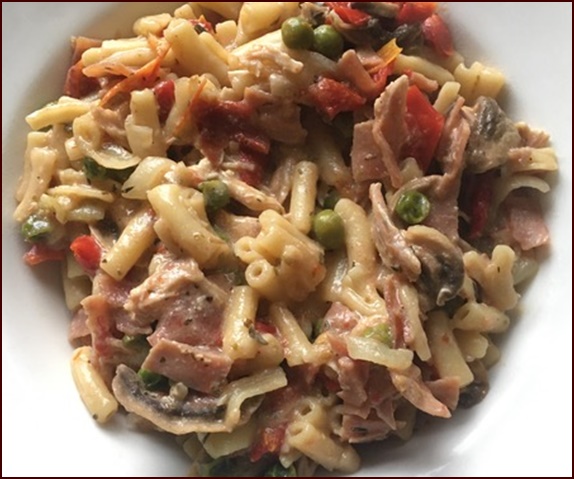