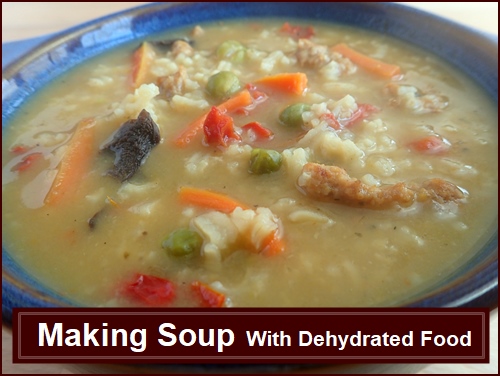 I create most of my dehydrated food recipes for hiking meals, but there are always several partially filled jars of dried food left over after the backpacking season. When I hang up my backpack for the winter, it’s time to turn the leftover dried food into soup.

It’s a good idea to use up your squirreled away food within a year. You can keep dried fruits and vegetables for perhaps two years if stored well, but rotating your home-dried food supply every year ensures the best taste and vitality of the food. Use up dried meat, fish, and anything containing oil within three to six months.

I make up one-of-a-kind soup dehydrated food recipes. The soups change depending on the ingredients on-hand and what I combine them with. My stash of fourteen different dried foods in Switzerland went into a tasty soup before I came back to the states. Did all those ingredients combine well? My darling wife, Dominique, ate two bowls for dinner and took some to work the next day!

Here are a few dehydrated food recipes for soups that I made with leftover dried foods. They will feed a whole family or provide several meals for one person. Each batch of soup was an improvisation based on ingredients on hand.

The point is to inspire you to put your dried foods to good use in a way that tastes good to you.

What will you create with your leftover dried food? If you come up with something tasty, please share it with us using the form at the bottom of the page. 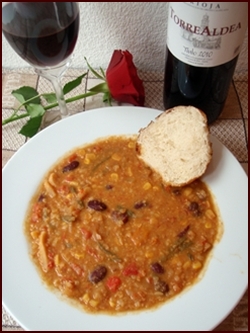 I used up a lot of bark for this soup which gave it a nice thick texture. The ingredients list may seem long, but in this case that was the point... to use up my dried foods. You can create something similar using the dried ingredients that you have on hand.

Soak, boil, and simmer -I soaked the dried ingredients (approx. five cups) in hot water for fifteen minutes, brought to boil for five minutes, and then reduced to a simmer for one hour. The long simmer gave all the ingredients time to soften and the flavors to meld. 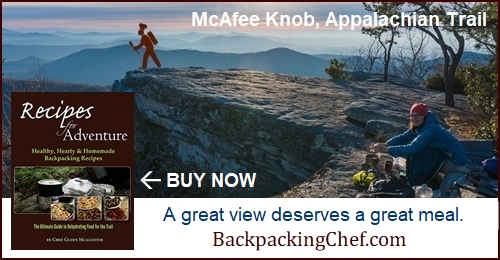 Here's another dehydrated food recipe for soup that I cooked up with surplus dried foods I had in my cupboard in Georgia. I combined nine dried foods, mostly beans, from my stash and added some chicken broth and seasonings. 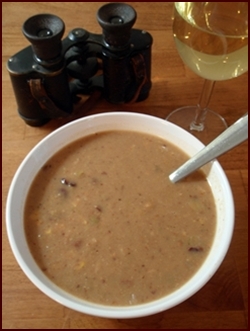 Soak, boil, and simmer - I soaked the dried ingredients in warm water for fifteen minutes. Then I added the chicken broth and seasonings and brought to a boil for five minutes. I then let it simmer on low for thirty minutes.

Blend some soup to thicken - I scooped two cups of soup off the top (floating peas, corn, and onions) and two cups off the bottom (mostly beans). I blended until smooth, stirred back into the soup, and simmered another thirty minutes.

Season to taste - The mix of red, white, and black pepper, along with salt, basil and bay leaves gave this otherwise boring bean soup a nice Cajun-style spiciness. Very tasty!

Here's a simple and delicious way to part with your dried vegetables and beans. Simmer them in a garlic tomato base. I didn't run any of the ingredients through a blender for this soup. It was very flavorful with minimal spicing. 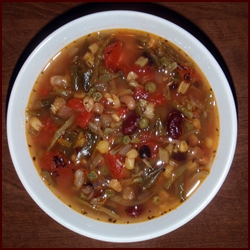 In a soup pot, soak dried vegetables and beans in nine cups of water with seasonings for fifteen minutes. Turn on stove and bring to boil for a few minutes and then turn down heat to simmer.

In a separate pan, cook onions and garlic in olive oil on med-low for five minutes. Add diced tomatoes, bring to boil and then reduce to simmer for fifteen minutes.

Add contents of pan to soup pot and simmer forty-five minutes to an hour.

If you have a leftover turkey or chicken carcass, use it to make a rich broth and add dried or fresh vegetables to it depending on what you have on hand. I made the soup below with two chicken carcasses. If you only have one, you may need to bump the flavor with some bouillon, but test first to see if you need it. 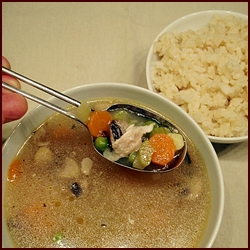 Use fresh or dried vegetables.

In a soup pot, boil carcass, loose bones and skin in water for five minutes. Turn off stove and let sit covered for an hour or two.

Remove carcass, loose skin and bones from broth. Pick off any meat from carcass and return to broth.

Turn on stove again to high and add vegetables to the soup as you slice and dice them beginning with the potatoes. (Or just add any dried vegetables at this time)

In a separate pan, sauté the onion and garlic lightly in olive oil and add to the soup.

Allow soup to reach a boil for five minutes and then cover and reduce to simmer until vegetables are tender.

Season as needed with salt and pepper, bouillon or herbs such as parsley.

If you have any dehydrated rice on hand, rehydrate with an equal quantity of hot water and serve on the side. You and your family members can decide how much to add to the soup at the table. To serve 3, I rehydrated 2 cups of rice with two cups boiled water.

View the dehydrated food recipes for soup that have been shared by readers such as Leslie's Thai Pumpkin Carrot Soup, Justin's Stuffed Pepper Soup and Paul's Quick Chili.

You can also make a soup at home with fresh ingredients, turn it into bark, and then back into soup on the trail. See my dehydrated food recipe for Pumpkin Soup in a back issue of my newsletter, Trail Bytes.

If you have some dried foods getting old in the cupboard, make up a dehydrated food recipe for soup and tell us how it turns out! Use the form below.

The form expands as you add your recipe. Please, no ALL CAPS and don’t worry about the formatting. I’ll make it look pretty. Don’t forget to click the button at the bottom when you’re finished.

Return to Top of Page

Free with any book purchase

Buy one book, get $5 off each additional book.