This 6-day backpacking food plan and trip report are from the first backpacking trip that Dominique and I took as a couple. All of the recipes are in my book, Recipes for Adventure. I doubled the ingredients from the usual large, single-serving portions. In addition to dehydrated meals, I also packed a generous supply of snacks: nuts, dried fruit, chocolate, and pretzels. 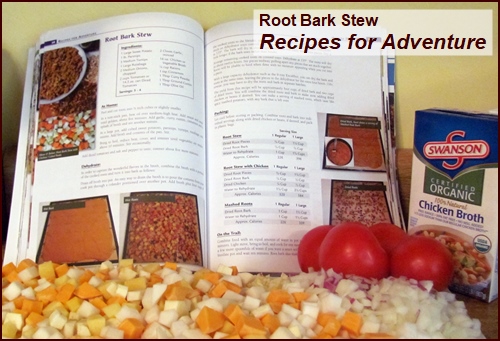 I cooked and dried these whole backpacking meals: Chili, Ratatouille, Root Bark Stew, and Saffron Risotto with Mushroom. Other meals were assembled from individually dried foods. The rice and potato bark were precooked and dried in the usual way, using chicken or beef broth for extra flavor. 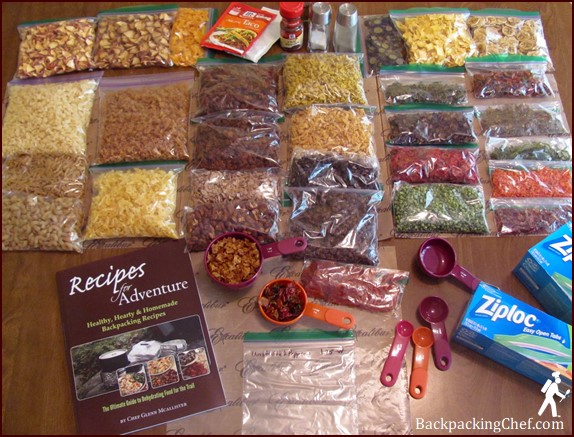 Six days’ worth of dried foods before I assembled them into meals, desserts, and snacks. 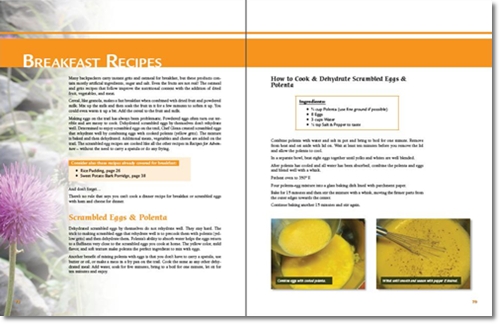 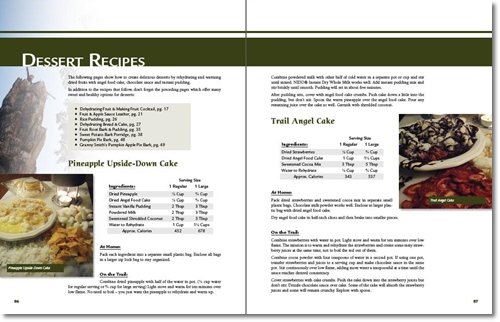 How did the 6-Day Backpacking Food Plan Workout? 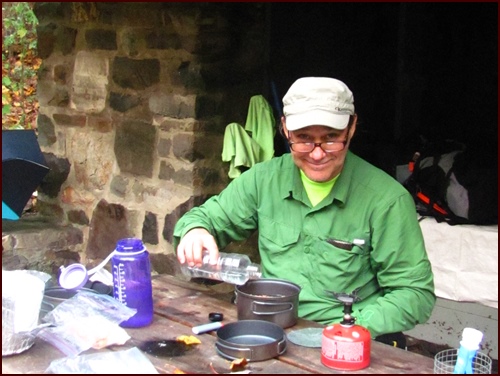 All of our meals were delicious. As it turned out, we only ate breakfast, snacks, and one main meal per day. Although I had packed meals for both lunch and dinner, the weather conditions were less than favorable for midday cooking. Dominique’s favorite meal was saffron mushroom risotto.

Left to right: Pot cozy, 227 gram Isopro fuel canister with Optimus Crux burner, 1300 ml and 900 ml Evernew titanium pots with fry pan lids, tea light candle cup and hardware cloth pot stand, denatured alcohol, aluminum windscreen. Not shown – two spoons, and one insulated coffee mug smuggled in by Dominique. All the components, except the alcohol bottle and coffee mug, nested into the small pot, which nested into the larger pot, with the cozy enclosing it all. 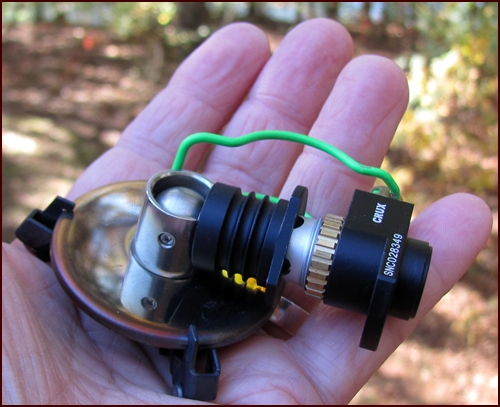 A unique feature about the Optimus Crux burner is that it folds at the stem for storage under the fuel canister.

I used the smaller pot and alcohol fuel to boil water for coffee while breakfasts were cooking in the large pot. In the evenings, I warmed and rehydrated fruits for desserts in the small pot, and cooked dinner in the large pot. I also used the tea light alcohol set up a few times to preheat the main meal during the soak phase. We used three to three-and-a-half cups of water to rehydrate and cook our two-person dehydrated meals.

My intention was to use the larger fry pan lid for Dominique's portion, but we ended up eating out of the same pot. Nevertheless, the extra head room created by the fry pan lids allowed all the cooking components to nest together.

After this hike, we started carrying a thermos food jar, which allows us to prepare hot lunches in the morning before we leave camp. We also use the thermos to rehydrate dried fruit for afternoon fruit cocktails. Another two-person cooking kit that we like to use now is the GSI Outdoors Pinnacle Dualist II Cookset.

This hike and 6-day backpacking food plan is described in greater detail in my trail journal, 1001 Miles on the Appalachian Trail. All the recipes are included in Recipes for Adventure.

This was Dominique’s first backpacking adventure; our first as a couple. I wanted her to enjoy it, so she would come again. Planning a trip with a partner was, at first, a challenge for me. I had been comfortable "hiking my own hikes." My usual style was to carry only the essentials in a lightweight pack. Dominique had other ideas. After adjusting some of our gear – and my attitude – we learned how to hike our own hikes – together. 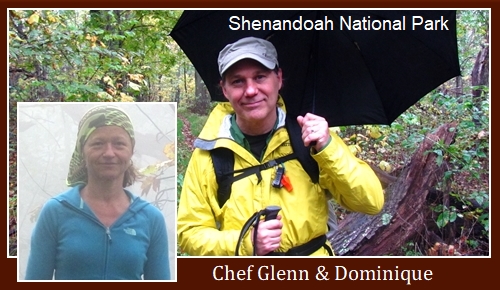 It rained every day and the fog was thick. Views of the fall-colored mountains eluded us. Occasionally, when it stopped raining and the fog lifted to treetop level, Dominique would let out a, “Jupi” and I would answer with, “Who-Who.” The forest was peaceful and subdued in the fog. Dominique called it romantic, but some of the deeper coves felt “spooky.” The path of leaves under our feet was in all the fall shades, and many plants in our near view still held late-season berries for migrating birds. Dominique was jubilant to be immersed in nature. 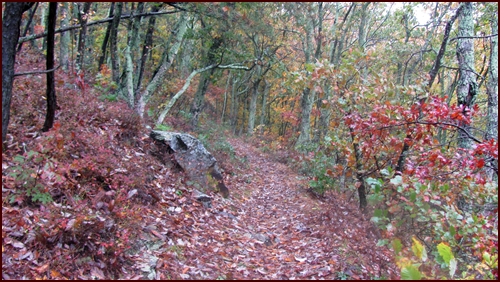 There was one moment of perfect timing at Blackrock Summit early one evening. Blackrock Summit is a rock-strewn mountaintop; the Appalachian Trail circles all the way around the tip with panoramic views. The fog lifted just as we arrived, and we got our one-and-only view of the autumn mountains. A thin strip of clear sky separated the mountain tops from the clouds, and the sun, from behind the clouds, sent rays of sunlight fanning broadly down to the mountain coves.

We wore our rain pants and jackets every day, taking them off from time to time when it warmed up. But it was mostly cool, and sometimes we encountered strong wind-driven fog. Our outerwear kept us comfortable. It rained hard several nights, and my nylon food bag got wet hanging from the bear poles. I thought the bag was more water resistant, but it didn’t hold up to the challenge. Fortunately, I had vacuum sealed all of our food, so a wet food bag was not a problem.

A mouse battle took place at Calf Mountain Shelter. Mice usually scamper stealthy in shelters, sneaking into packs for crumbs and such, but these mice squeaked loudly as they tussled. 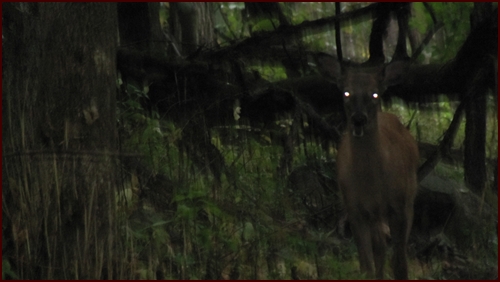 We saw deer every day. They were not scared of us. I walked right past a big, antlered buck that was standing just off the trail, and didn’t even see him until Dominique pointed him out. There was bear scat all along the trail, but we did not see any bears. The shelters were equipped with bear poles for hanging food bags. We saw one baby snake and one long black snake who looked well-fed. While standing on a ridge, we watched hundreds of black birds fly in and fill the trees above us. They flew off a moment later and disappeared in the fog. 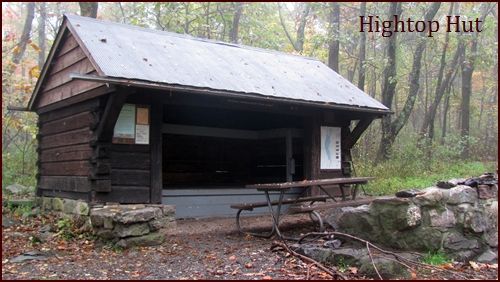 We got started later than I thought we would on the first day, so we hiked the last mile to Hightop Hut in the dark with our headlamps on. I could tell that Dominique was a little stressed about getting to the shelter; she wasn’t as interested as I was in chatting with a couple of deer we encountered shortly before the sun went down. We shared the shelter with four men. Two of them – Marine veterans – had challenged themselves to hike the entire one hundred miles through the park in five days. At three days into it, they sported blisters on top of blisters, yet were stoic in their resolve. The fire in front of the shelter provided light for me to cook a pot of rice pudding. We were not overly hungry, because we had cooked a pot of tuna mac casserole late in the afternoon.

As it turned out, we slept in shelters four out of five nights. I did not expect Dominique to like the shelters, but since we usually arrived with little or no daylight left, it was faster to roll out our sleeping gear, filter fresh water, and cook dinner at the shelters, than to fiddle with the tent. Plus, if we used the tent, it would weigh a lot more packed up wet.

At one shelter, rain poured over the roof gutter, which we collected and filtered for our evening and morning needs. The shelters were all damp. We spread a sheet of Tyvek under our sleeping pads. Our damp clothes and socks remained damp in the mornings. Thanks to Dominique’s stash of soap, wash cloth, and sundry personal care items, we ventured forth cheerfully clean every day.

We used our tent at Loft Mountain Campground. Arriving late in a soup of cold fog and drizzle, we got the tent up in ten minutes. The vestibule portion of the Hilleberg Nallo 3GT tent extended past the provided camping pad, but the area was flat, so it wasn’t a problem. We liked that we could enter the vestibule while it was raining and zip it closed before entering the sleeping quarters of the tent. The campsite had a picnic table and a bear box for food storage. Our resupply box, which I had mailed to the camp store, held our vacuum sealed food for the last three days of the hike, two single-serving bottles of wine, and two tea light candles.

It was dark when we cooked dinner with our headlamps on. The candles, which I placed inside Styrofoam cups, glowed like lanterns. Dominique had brought along foam fanny pads. They were light as a feather and warm to sit on. We blocked some of the rain and wind with strategic placement of our umbrellas over the table. When it came time to eat, Dominique held an umbrella over us while we ate our meal out of the pot – mashed potatoes with beef and vegetables. In the smaller pot, I rehydrated and warmed strawberries and chocolate sauce to spoon over dried cake.

The wet tent was indeed much heavier when we packed up in the morning. Dominique took some of our food in her pack to shift some of the weight to her. What a partner!

And that’s how our first backpacking trip as a couple went. “Jupi.” “Who-Who.”